I walk through the isles of the supermarket and for the first time I really see how ridiculously expensive everything is. Not that I shopped blindfolded before, but we’ve always been in the somewhat luxurious position of not having to count every penny we spend. And especially when it comes to food we don’t really pay attention if something is maybe 10 cents cheaper then the brand next to it. But ever since Mona started her living leaner challenge that has all changed. I have renewed respect for the people that manage to live of a salary half that of ours and have four (or more) mouths to feed too. I feel spoiled and somewhat embarrassed for having lived so recklessly before. It’s also coming at a perfect time for us to be looking more at our spending pattern. Tom is without a job and while he still gets paid until the end of the year, finding a job has so far not been easy. And December is historically the worst month of the year to find a job anyway so it’s not very likely that he will succeed before the end of December. That also means that as of January our income will dramatically decrease. Neither of us have never been out of a job before. Well I think I was at the age of twenty for a whole month.. but that doesn’t count. Tom doesn’t like it. Gets terribly frustrated that he can’t find anything.

And that is understandable but I think we will somehow get through this and come out stronger at the other end. I will be glad that 2011 is about to end as it has been the worst year ever with loved ones dying, holidays cancelled due to earthquakes and other reasons, Tom losing his job… lol.. you would get depressed over less. Still in the grand scheme of things I do realize that there are tons of people who scrape by on far less and are in situations I hope to never be in, so it’s all relative. And I’m a positive person so all will work out in the end!

But to come back to the topic at hand; we’re having a fun time trying to eat for under the 10 euro and sofar it’s going fine. We’ve had to make some choices which we would otherwise not have made but also some delicious meals as a result of that! This pumpkin meal is another delicious one and coming in at € 7,37 for the meal but it will feed us for two days I’m sure. 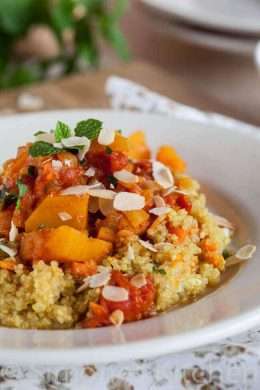