This post was previously published on Junglefrog Cooking two years ago

I was madly in love. Madly in love with a tough biker guy called Paul. He was blond, tall and handsome and every time I looked into his eyes I sort of felt my butterflies dance. I had met Paul through a mutual girlfriend called Agnes. At the time I was still working as a nurse and had just discovered the joys of going out, disco’s and staying up far far too late. I was a little older then twenty at the time.

For the life of me I cannot remember what Paul did for a living or if he was still a student but I did know that I was head over heels in love with this guy. So when he asked me to go on a tour around the Ijsselmeer I did not hesitate and jumped at the chance. My friend Agnes would join too together with Paul’s friend so that would be a fun event…. or so I thought. The day was of to a bad start, so maybe that was the beginning of the inevitable end. It was cold, windy and it looked liked it would rain. My hair was long and curly at the time, but what I had not thought about is that I would have to wear a helmet for the entire day. Sitting on the back of a motorbike riding for the entire day, holding on for dear life as  the wind threatened to throw us of course. On top of that; they had not exaggerated when they said they would go for a bike ride… I cannot remember that we stopped at all during the entire ride from hell.

But ok, all in the name of love and I was snuggled up close to Paul, feeling all freezing cold but thinking it was for a good cause. By the time we came back home and I finally managed to get of that damned bike I was as stiff as a 50-year old lady (O, I should REALLY not make that comparison at my age!!!) my hair was as flat as a pancake and static too and my back was not happy…

Paul laughed and took me closer in his arms. I snuggled up against him and then he kissed me… A warm, wet and sloppy kiss. Like being kissed by a dog but then worse. Seriously. I almost recoiled… Have you ever had that before? Madly in love, one kiss and the love was over, completely, totally and forever irreversibly over? That was THE worst kiss I ever ever received in my entire life. It was gross and disgusting and I seriously had to keep myself from running away. Maybe the day was never meant to be a good day, with the way it started but to this day I am not sure Paul ever realized what hit him.. lol… I can’t even remember how we said goodbye. I might have mumbled something and sort of half ran into my house, shutting the door firmly behind me, leaving a somewhat surprised Paul behind. Poor guy… I mean, I couldn’t possibly shatter his self esteem and tell him that he was the world worst kisser, now could I? But since there was no other explanation, I just chickened out and left him to figure it out for himself.

Now how’s that for a romantic Valentine story to warm your hearts on this cold cold winter day?

As for this recipe; what can I say? It’s absolutely delicious and a perfect treat but I have to say that it does look more like Easter cupcakes then Valentine cupcakes. But that’s good! They can be used on multiple occasions! 😉 I was also having cupcake photography block.. Too many cupcakes in too short a time… O well it’s the taste that counts! And for a bit more romantic recipe you can check here. 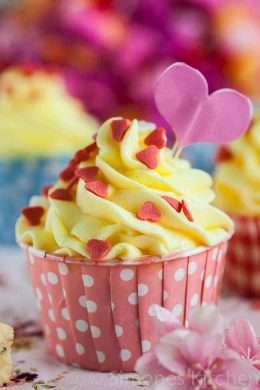 « Previous PostTortuguero – when it rains, it rains
Next Post » Jalapenos – Raw photography challenge