Celeriac and apple soup with poppy seed or sesame seed

Celeriac and apple is a great autumn combination in this delicious soup. You can serve it with a bit of nut oil over the top and a sprinkle of sesame or poppy seeds.

Where I first heard about this combination of celeriac and apple for in a soup, I can’t fully remember. It might have been on Jamie Oliver’s site or not. I don’t know. That’s the thing sometimes with recipes. You see something and then decide to make it weeks later. But it’s not always possible to remember where you first saw it. Anyway, it’s a brilliant combination. The taste of the celeriac and apple soup is slightly sweet but with that herby flavor of the celeriac it is the perfect pairing.

I’ve made this soup a couple of times and I tend to vary the ingredients depending on my mood and what is in the fridge. The first time I made the soup I used potatoes but the second time I didn’t. I liked that better to be honest, so I changed the recipe below to reflect that change. But if you want it to be slightly thicker you can add potato. Potato binds the soup even more. The picture below is with the potato. The one above is without.

How to clean the celeriac for the soup?

Now if there is one vegetable that is slightly ugly looking it is the celeriac. But it’s so delicious that I don’t really care.. For cleaning the celeriac I cut it in two. I then proceed to removing the skin. That is easiest to do with a big knife. Lie the celeriac on the cut side flat on a wooden board. Cutting away from you remove the skin completely and then cut the celeriac in cubes.

Which apple to use for the celeriac and apple soup?

You can use whichever kind of apple you prefer. I used somewhat sour apples the first time, but just picked whatever I had on hand the second time. Both worked fine.

How much stock to use in the soup?

I like my soup to be really thick. So I used only 500 ml (plus the 100 ml of the almond milk) but if you want it a little thinner, it is quite easy to add some more liquid. Just blend it with the stick blender and then decide if you want to add more or if you like it thick as much as I do. 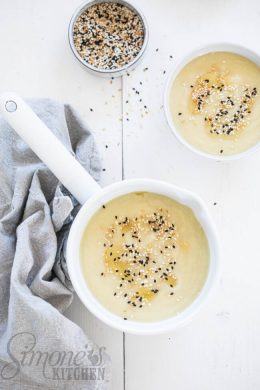 For the soup I have used around 500ml. The additional 250 ml is for making it thinner to your liking. You might not need it.
Prep Time: 10 mins
Cook Time: 40 mins
Total Time: 50 mins
Servings: 4 people