I have to confess that we’re struggling a bit with our whole30 this time. We’re half way through, to be exact on day 20 when you will be reading this and the inspiration to cooking something new and fun seems to be lacking a bit. And when it’s the weekend on top of that, something has to be done about that! Not cauliflower couscous again or tuna salad. No matter how good it is. Something new… And luckily there was Donna Hay. Silly enough I just realized that I actually took a digital subscription to the magazine last year somewhere and than totally forgot about it. Which meant that I had a total of 7 magazines left to download! Seven magazines full of delicious inspiration!… But as you might have guessed; Donna does not do whole30…! So that means that most recipes need some serious adapting to fit into a whole30 or paleo approved diet. This recipe included potatoes and cream so some serious adaptions where needed. But I can tell you mission acccomplished! I also decided that soon I will be doing a challenge where I will be cooking every single recipe from one particular magazine. Front to back. I am guessing it’s gonna be a Donna magazine but I need to check with Donna if it is ok to post so many recipes from one magazine. So more on that later!

I just think it sounds like a fun challenge! For now this is a good hearty soup and to stay in the Donna mood, I made the photo a bit Donna-like; light and not a lot of fuss! 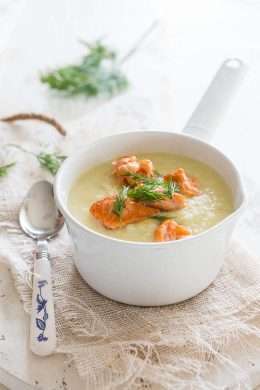