I made this soup the first time when I was doing my first whole30 somewhere back in 2014. In the meantime I have made it several times since as it is simply so good. And super easy to make too. If you’re watching your carb intake, this is also a low carb recipe.

The recipe originally comes from the book Well Fed by Melissa Joulwan, Which was my go to cookbook back in the days when I didn’t really fully grasp the concept of the whole30. In the meantime I have learned that it is actually quite simple, but at that time I was confused about almost everything.

Now making this soup is pretty simple. You need a couple of things in your equipment belt to make it easy. First you take a large pot and you start by frying the onions, carrots and the garlic, before you add the cauliflower. I like to bake mine for about a few minutes until the edges of the cauliflower florets start to brown a little bit. That is not a necessity but it does give more flavor. Or so I think.

Once you have everything in the pot you can add the broth. I like to use either beef broth (as I did here) or chicken broth. Of course if you want you can also keep it vegetarian by using vegetable stock. I do find that the beef or chicken ads more flavor. Or if you have a homemade bone broth, that would be even better for added nutritional value.

You let the soup simmer for about 45 minutes on medium heat or until the vegetables are cooked through. You should see that if you poke a fork in it. I puree the soup with an immersion blender (or stick blender). If you don’t have one you can use a food processor to do the job instead. Using a stick blender is definitely one of my favorite ways to create a smooth and creamy soup.

You add the coconut milk at the end when you have already blended the soup. You heat it through and make sure it is to taste. If you don’t want to use coconut milk you can also use heavy cream for this. (which is obviously not whole30 proof!)

Now to top the soup of you want to use some crispy bacon. I simply bake that in a large frying pan and let it drain on paper towel. That will help crisp it up. I serve the soup in bowls and add the crispy bacon on top. The ultimate comfort food if you ask me.

Can I keep the soup?

Yes you sure can store the soup once made in an air tight container and serve it in a big bowl the next day. Do make sure you add the bacon at the last minute to keep it crisp.

In essence this is a very simple soup which works well in a whole30 diet or even in a keto diet. If you want the soup to be a little bit thicker you can add some white potatoes together with the cauliflower. This will thicken the soup once you start blending it. It will also increase the carbs so if you’re on a keto diet you might want to leave those out.

While the soup already has a rich flavor you can enhance that even more by adding extra’s on top like green onions or add a bay leaf to the broth when cooking. This will also increase the depth of flavor. While this is – for me – a typical winter soup, it also works really well on summer days as it is not too heavy. 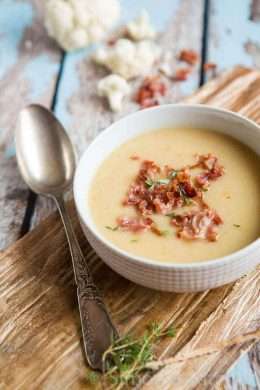