Vegan banana bread with apricots and without added sugars

This delicious vegan banana bread took some work to get right, but this version is super easy to make and delicious with added apricots and without any additional sugar.

So mission failed. Of course we are talking years ago, when baking without butter and eggs was simply not very fashionable yet. No one really knew how to do it, except probably a few that did it all the time. But information was scarce so I had to find out by myself. I learned about the power of flax seed or chia. The magical properties of arrowroot or tapioca powder and more. But still this vegan banana bread kept giving me issues. Until now.

The one time that I made this recipe before I followed a known vegan recipe that I found online. But I found it rather underwhelming. It was hard and not very good. So I tossed the banana bread and went back to the drawing board. Initially I wanted to make this bread with dates for sweetness. But while I thought I had dates in the cupboard they turned out to be from the stone age. So rock hard there would be no point in using them.

That’s what you get when your cupboard is too deep! But I also found some apricots and while less sticky I was hoping they would work. And it did! The faint apricot flavor was actually really good.

How to make the banana bread

Now to make the banana bread the most important ingredient is – obviously – the banana. The browner the bananas are the sweeter the cake will be. My bananas where medium sweet so the end result of the bread was not very sweet at all. In fact it was almost more like a ‘normal’ bread and I think it will actually work quite well with something like avocado to serve. Will test that for next time!

How does it bind without eggs?

Well the funny thing about this vegan banana bread is that the banana actually works as the binding agent. That makes this the perfect starter cake if you want to bake something vegan. It’s delicious and you won’t miss the eggs. Having said that I am still a sucker for this banana bread that does use everything.

How long can I keep the vegan banana bread?

You can’t keep this as long as you would a regular banana bread. Due to the lack of egg and butter it becomes dry quicker. I tend to bake it, eat whatever I want or want to serve that first day and freeze the rest. I like to freeze it in slices so it is easier to defrost then if you would have the entire cake frozen.

Can I leave the apricots out or can I substitute?

If you do not like apricots you can definitely leave them out. However since it does give a little bit of extra sweetness it is best to replace it with dates. Unless your bananas are really ripe, then you can probably get away with it. Alternatively you can also add an extra banana instead. 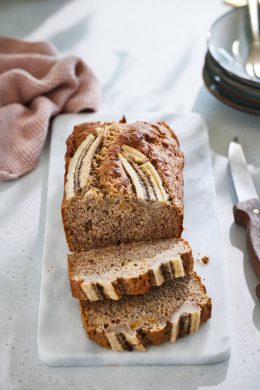