If you think about it a banana is really quite a weird kind of fruit. Green it is inedible and has no taste whatsoever, beautiful and yellow it is delicious sweet and good and just a little bit further it is a horrible texture. Horrible texture with brown spots. Eat one banana and it apparently stops you going to the toilet, eat too many and you’ll be on the toilet all the time.

I only really like a banana when it is nice and pretty and yellow, but if you’re baking with them it’s a different story. The browner the better. I’m sure there are recipes out there that use a green banana but for the ones I know it’s brown. There are many types of banana and most you can’t really find here. You have the standard yellow ones as we know them, but in addition you have banana’s that are really only suitable for baking and cooking, you have apple banana, red banana and baby bananas and many more.

The thing is that Tom is “allergic” to bananas. You didn’t know it was possible right? Neither did I, but whenever he eats a banana he spends the rest of the day on the toilet. And not only from eating a real banana. he never does that, obviously, but whenever there is banana in the recipe (think banana pancakes or a drink with banana) it’s bad news. And that’s a pity.

For me because I don’t bake as often with banana as I would like to and for him because that toiletseat becomes very uncomfortable after a few hours.. 😉

But that doesn’t stop me from making the occassional banana filled thing. And because I am often left with lots of banana (being the only one who eats them here) baking is often the logical solution. I really don’t like those brown mushy ones, but in a bundt cake or in this banana bread it is an absolute winner!

Use really ripe bananas as that will enhance the flavor. This cake is very good with a homemade caramelsauce! 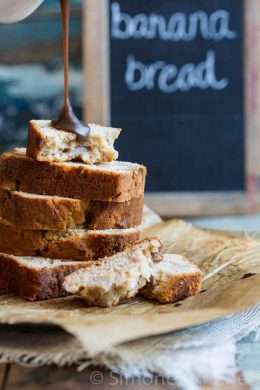