The color alone will make you want to make (and eat!!) this pumpkin celeriac soup which is even better if you make some homemade croutons to go with the soup.

Celeriac is probably best know for it’s use in soup. And for good reason as it makes any soup better. I love adding it to thick soups like this pumpkin celeriac soup. And the color is just an added bonus. I came to this recipe because I had a bit of vegetables leftover in the fridge and so I just combined them together to make this delicious pumpkin celeriac soup.

Truth be told, I usually make soup based on whatever is in the fridge. I very rarely go out and buy anything. It is the perfect way to use up leftovers. I had some garden cress plus some stale bread to accompany the soup.

For the croutons you can make plain ones with just the bread, olive oil and maybe some salt and pepper, but if you want to spice it up a bit you can vary it as well.

My favorite way to make croutons is by adding parmesan to it. For this to work I place all the cut pieces of bread in a large bowl and mix it with (quite a bit of) olive oil. I shake the croutons around so they’re all covered with olive oil.

I then grate half a piece of parmesan over it. That would roughly be around 75 gram I think. I mix that with the bread as well and then proceed to baking it.

Which pumpkin to use

Quite frankly, any pumpkin (of the edible kind) will work fine here. I have used butternut squash in this recipe, but recently I found out that the other pumpkins are so much more flavorful. So if you still have to buy the pumpkin go for an orange one or a blue one or any pumpkin other then butternut squash.

I was very surprised to find out that there was so much difference in flavor between the various pumpkins. 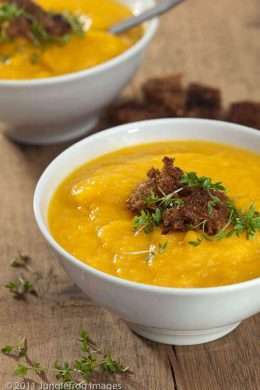