A perfect autumn treat with this spicy pumpkin soup with yogurt. The yogurt in the soup makes it lighter than if you would use coconut milk for instance, but preserves all of the flavor.

I happen to see something in a blogpost this morning that apparently October is pumpkin month. As it is, I will be in a country where I don’t think they are very familiar with pumpkin so you’re just gonna have to let me go wild now. Although I do have to warn you that there are quite a few delicious pumpkin recipes scheduled in for October so I’m sure you’ll not have a shortage in pumpkin recipes anyway.. 😉

Autumn and pumpkin.. That is almost one and the same word right? And I am sure I have mentioned it before but despite the fact that you can literally buy butternut squash all year round I still think it is more of an autumn dish.

And because I am still having a terrible cold a good spicy pumpkin soup seemed like the winner dish to make for an easy Friday evening. It is different with the spices and the yogurt but really good!

Tom even thought it had a bit of Moroccan flavors but I do have to say he thinks that of everything that has cinnamon and cloves in it. Hahaha… We had this soup without bread since we’re trying to cut back a bit on carbs (almost on vacation, you know how it is!) but I imagine it would be insanely good with a crispy sourdough..

I like my spicy pumpkin soup to be rather thick but if you like yours a bit thinner you can of course add some more stock in there. Or more yogurt. The yogurt makes it surprisingly creamy without the added calories that regular cream would have given you.

I love this bowl of soup and it is the ultimate comfort food whenever autumn comes around or whenever you are having a cold.

What goes into the spicy pumpkin soup?

There are a few things you can easily replace in this spicy pumpkin soup. For starters, you can vary with the type of pumpkin you use. Before I experimented with pumpkin flavors I always went for a butternut squash. As it turns out, that is the least impressive flavor. There are so many more delicious pumpkins out there! So try and use different varieties.

I roasted the pumpkin before adding it to the pan. That is optional. It does increase the flavor, as roasting tends to do, but it also adds time. Instead you can simply add all the ingredients to the soup pot and cook them the same way.

The yogurt in this recipe can be replaced by coconut milk or almond milk. The latter will be less creamy and will make the soup thinner. But it is definitely an option. Or leave out the milk altogether and just use stock. Again this will thin the soup significantly and will also change the creamy flavor.

The good news is that this soup is perfect to prepare in big batches and freeze for later use. You can keep it in the fridge for about 2-3 days, but freeze it in portions and you can use it for 2-3 months. Perfect for those times when you do not feel like cooking but still want a decent meal on the table in no time.

What pumpkin can I use for the soup?

As mentioned you can use any kind of pumpkin you like. Try and vary and see which one has the most flavor

I want to make this a paleo recipe. What do I do?

Turning this spicy pumpkin soup into a paleo recipe is easy. You just take out the Greek yogurt and replace with coconut yogurt or coconut milk. (I’d rather go for the milk in this case). That’s all that’s needed.

Do I have to roast the pumpkin?

No you do not. You can simply cook the pumpkin together with the other vegetables and blend with the stick blender once done. Roasting does add flavor but it is not totally necessary.

Can I prepare this soup in the slowcooker?

Yes you certainly can. In that case place all ingredients (except the yogurt) into the bowl of the slowcooker. Put on low and leave to stand for about 5 hours. Blend with the stick blender and add the yogurt last. Leave to warm through and serve. 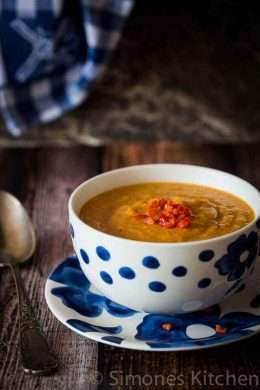 Try these pumpkin recipes as well!