I waste… We waste. We waste far too much food and quite frankly that doesn’t feel good. We also spend. We spend a huge amount of money every week or month on food and if I then have a look at what goes in the bin afterwards it’s fairly shocking. It seems more and more people realize that we are our own worst enemy in that respect as the campaign of ‘no waste’ are popping up everywhere. Head-to-tail is also a popular theme at the moment but I thought I’d would start at becoming better in spending our weekly budget and when my dear friend Mona from the blog Wise Words talked about living leaner, it seemed the perfect opportunity to jump in.

You see, Mona is one of those people that manages to feed an entire household of husband plus kids with just 10 bucks a day.(Granted she has the chef to cook but let’s forget that part for now). I struggle doing that for just the two of us. How sad is that? So I read through her post and honestly if you have not yet visited Mona before then you should. She is one of the funniest and most honest and down to earth writers that I know and should not be missed! Having said that; her post inspired me to start thinking about our food pattern. I’ve moaned to you before about our planning which is just terrible and I think that is part of it too. Without proper planning it is hard to be sensible about what you spend. So gotta get better at both! To start of our new and improved lives I figured this vegetarian dish might be an easy win. Meat and fish are expensive and I didn’t want to start of with a negative figure. I told Mona I would go with the 10 euro budget, even though I have only two mouths to feed. It sort of feels like cheating but in reality it is sort of true that it becomes cheaper per person the more people you have right? And I did use quite a few items that I had left in my storage cabinet such as flour, but that’s ok too right? And it turned out to be a really delicious soup too.

I still have to figure out how I write down the cost as I did buy a few items that I will be able to use for something else later such as carrots. A bought a kilo but used only half. The total spend for this dish was € 6,50, including a kilo carrots, gingerstalk (leftovers too), coconutmilk and beans. I used oliveoil, vegetable stock, lime,cuminseeds and flour from stock. But we did actually eat two days of this soup, so in actual fact it was only 3,25. Hmm, need to think about that calculating thing a bit more it seems! The first step is made for us to eat healthy on a smaller budget. And don’t worry; I will not go all vegetarian on you… But we might be eating less meat for sure (shhtt, don’t tell Tom now!) 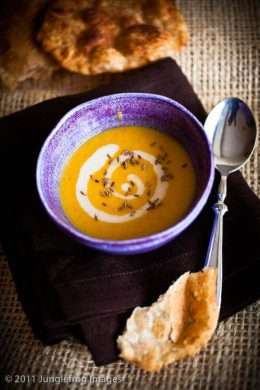