I sure hope that dishes like this soon fail to look appealing to me, but as the weather is still close to freezing point here, making a stew is almost the natural thing to do right? In our black box Tom had included pork stew meat (which is most likely called entirely different but for lack of a better description, it is pork stew meat..), bimi and pickled chili’s so that is what I had to include in this dish. I always think a stew is one of the easiest meals to make, together with soup probably. It’s perfect for throwing in leftovers and you can change the flavors easily by adding different herbs or different ingredients. It takes a while to make but you don’t really need to sit next to the stove to keep an eye on it, so just let it simmer away for a couple of hours and you will not be disappointed. O and those innocent looking chili peppers in the little pickled pot were incredibly hot! Good thing I tasted one before throwing them in… (well I put just a tiny piece in my mouth and removed it straight away. So hot!) 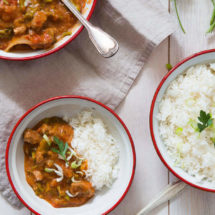