Onion soup with crunchy bread with cheese on top

There is something so satisfying about a really good onion soup. Of course you serve this with a piece of bread on top which is loaded with cheese. Just quickly roast to melt the cheese and it’s time to dig in.

Onions are one of those ingredients that you probably have in the house. It’s a humble ingredient and with prices going through the roof, it’s pretty affordable in general. But it is also the start of many really good dishes so using them is one of my favorite ways to enhance the flavor in a dish.

However, I had not made onion soup before until I went slightly crazy when the onions where on sale a while back. I purchased way too many onions so the natural thing to do was to make an onion soup. Now onion soup is one of those under rated soups I think. It is super simple to make and done well, it is packed with flavor and so delicious!

I like to serve mine the French way with a piece of bread on top. The bread is then topped with lots of cheese and melted under the grill. Just quickly but it will create so much extra flavor and make this ordinary onion soup a really delicious onion soup.

What’s the difference between onion soup and french onion soup?

Now there’s a good question.. To be honest the difference is small. The french use yellow onions and the soup itself is usually made with beef stock instead of any other stock. Regular soup can be made with any kind of onion and you can use any kind of stock you like. In this case I opted to keep the soup vegetarian and so went for the vegetable stock. But feel free to make it more French if you so desire. The preparation is roughly the same.

Some other things that go into the French version of onion soup; white wine, bay leaves, butter (of course) and obviously the onions.

Which onions do you use?

You can use any kind of onions in the soup. Just make sure to leave them to simmer long enough so they become really soft and caramelized. Use either red onions, as I did here, white onions or yellow onions. Even shallots would work. They would just require much more cutting.

How do I prevent tearing up when cutting the onions?

If there is a way to avoid that? Please let me know! Since there is quite a lot of onion to go through here, I peel them, cut them in half and toss them in the machine to chop. You do want them to be in rings and not small pieces so make sure you use the right attachment for this.

I’ve seen people wear goggles, ski masks and lots of other things but I think the crying part is never far away. It’s almost impossible to prevent! 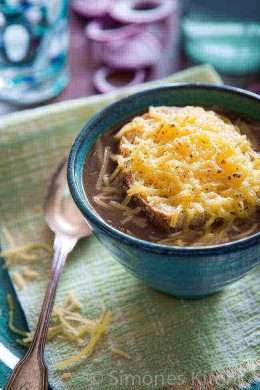 For this recipe we used two jars of beef stock but only half the amount of water. One jar says to add 3 jars of water to it. We did that for the first but it made the taste quite bland, so we added another jar of stock in but left the water out.
Course: Soup
Cuisine: French
Keyword: cheese, onions
Diet: vegetarian