Old Dutch poffertjes or small mini pancakes, as you might call them, are a treat that is famous in the Netherlands. You can make them yourself or buy from a special “poffertjesvendor”. You eat them with some butter and icing sugar.

We must all have them; recipes that you have know so long or have taken completely for granted but when asked about them you go “Uuuhhhh… I actually never made that!!” I had that realization when Nurit of FamilyFriendlyFood asked me if I had a recipe for poffertjes…

Eh… well no, and when I thought about it: I had never made them myself! When we were little my parents did have a poffertjespan and they made them on regular basis as we loved those little pancakes, but that was sort of the last time that I had tasted homemade poffertjes. During the summermonths in one of the town that I used to live close by, there is always a typical “OudHollandsche Poffertjeskraam” and we would go there every summer, at least once. The poffertjes there are fantastic and now that I have made them myself I might actually ask them for their recipe next summer!

Anyway, I did look up a Dutch recipe for Nurit and send it to her via email at which point we started to think about blogging about this together. How fun is it that we can virtually cook together?? You should really check out Nurit’s blog (no longer online).

For making poffertjes the first thing you need is a poffertjespan, which is a cast iron plate with “holes” (not actual holes of course, but some kind of dents) in them to support the poffertjes and to give them their round shape.

I was shocked to read just a few minutes ago that poffertjes actually originate in france!!

They were first baked around 1795 om monastery where they made the holy bread (sorry I have absolutely no idea how those are called in English!! I’ll look it up!). There was a shortage in wheatflour and an abundance of buckwheatflour so they started experimenting and that is how the first poffertjes came to be.

Marketpeople and salesvendors who bought products from the monastery took the recipe and during the french revolution they marched with the army of Napoleon to the Netherlands and sold the poffertjes at year markets and fancy fairs. And that is how the “Dutch” poffertje came to be Dutch. I actually don’t think you can find them in France anymore. Have never seen them there!

So how did I do with baking my first ever poffertje. I found the process slightly more difficult then I had anticipated. The batter needs to rise for about 45 minutes but then becomes quite thick so getting small amounts in the holes was hard and by the time I was at the 6th hole, the others were already starting to go to fast.

So I ended up with baking them for a little bit too long. Turning them quickly also requires some practice so that didn’t help either. I did think the taste was very good and I can see how they would work great if you bake them a little shorter and serve them a little warmer. lol..

I was so busy trying to turn them and then getting them out of the pan, that by the time I had them all the first ones were already beginning to cool down. Plus I then forgot to put the butter on top so the butter didn’t particularly melt very well. Poffertjes are traditionally served with butter and icing sugar, but you can vary with them to your liking. Rum in the batter is a very well known variation here and the list is quite frankly endless.

I decided that it would be a fun comparison test to make the Danish version and also try a ready made batter for poffertjes.

You can buy premade mixes here in the supermarket. You just have to add milk, shake it and your batter is ready. But there is nothing more fun than making your own, so here is the recipe for the poffertjes! 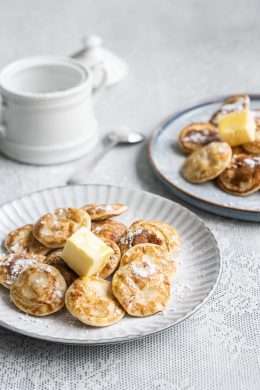