This post was previously published on Junglefrog Cooking (in 2010) but I did not want it to sink into the archives!

Today I had a revelation; I have loved poffertjes all my life but as of today it is official; the Dutch have been defeated in the making of these treats by the Danish… 🙂 It’s sad but true.

Well, ok in the defense of the Dutch nation; it is not really the same recipe and there are some noticeable differences between the two, so maybe I shouldn’t even be comparing them. You know what? Let’s not.. I might offend half the Dutch population in the process of proclaiming the Danish ones better so let’s not go there…lol… But seriously… these little darlings are sooooo good and I didn’t expect them to be so it was a delightful surprise when I was making them this afternoon.

Being all alone in the house I could not share them with anyone unfortunately (or fortunately!) I had to send Tom a text message saying that he missed something really really good and a promise that I will make them for him tomorrow. Yes, they are that good!

How did we get to making these little gems? As you might remember if you read this blog more often Nurit of FamilyFriendlyFood and I had a ‘virtual cooking together’ session last month in which we made our national treat of Dutch poffertjes. You can read all about it here.

We liked it so much that we have decided to try out more variations of the pancake/poffertje theme trying out various recipes around the world. This month we are going to be joined by Trissa from Trissalicious so I cannot wait to see what they have come up with! We initially had planned to make these earlier but due to all sorts of reason it got pushed out a bit further but here we are; I have made them!

Aebleskiver to the win

So what does make these so much better then the Dutch ones? For one; the aebleskiver are somewhat bigger, so that gives you the opportunity to fill them with lots of good things. That also gives them a unique quality in my eyes above the regular poffertjes as I do think that the filling makes a big big difference.

That plus the fluffy and airy texture of them. I think it is the beaten egg whites that go into the batter that gives the Aebleskiver the airiness and the slight crunch on the outside. Combine that with fruity or chocolaty insides and you have real winner.

I made only two batches since I was on my own. The first batch I baked with banana slices inside and the second one with a teaspoon of apple compote inside, but really you could fill it with just about anything you like; cherries, pineapple, jam, chocolate and fact I would not be surprised if they go really well with cheese inside of them too… Ooo, now that I am writing that down; I am sooo gonna try that next! Blue melty cheese on the inside… How good can it get?

It’s all about the filling

I have to confess that I ate both of the portions and felt that I could still eat more of them. Which would not have been a good decision at this point. Good thing I didn’t plan on having anything special for dinner as I am kind of full after eating these, so I think I will just settle for some leftover macaroni from yesterday if I end up feeling like eating again…

And now; the moment you have all been waiting for; the recipe…. I got the recipe from Nurit actually. This was the recipe that was attached to the pan when she bought it. You have to know that in order to make these you need a special pan, which I took a photo of a little above this text.

It typically has 7 large dents in it to put the batter in and is made of cast iron. At least mine is. Keep in mind also that mine is weird in the sense that you cannot use it on the stove without putting something underneath. Not sure why that is really but I used a baking tray rack to put on top of the stove so I could put the pan on it.

It did mean that it got heated slightly uneven so I had to keep that in mind while baking them but other then that; it all went fine. I could even get them out of the pan quite easily. Just make sure you use enough butter here… Not a low calorie treat for sure! 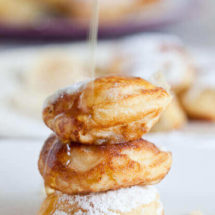