How to make easy American pancakes

Who doesn’t like a really good American pancake. The kind that is thick and fluffy with tiny outside crispy edges. With this simple recipe you can’t go wrong!

Remember when we started with our pancakes around the world series? Nurit from Family Friendly Food and I have made the following already:

And now was the time for American pancakes. Nurit and I quickly decided on our next pancake adventure and a date was set for us to post. Let me first start by saying that with me following the weight watchers diet; pancakes is certainly not the best nutritional value if it comes to that, but…

I’ve used a lot of fruit while eating it and possible a little less sugar then I would normally toss on. Plus I compensated by doing extra sports as well… Now I only have to survive the pastry class of tomorrow… sigh…

But all that aside; I first started by searching the internet for a good recipe. Now there are as many American pancakes out there as there are Americans (or so it appeared) so I just went with my instinct on what would be good and I chose a recipe from the BBC Good Food website. That is always a reliable source of information on recipes. But you might not think it is the right traditional recipe; if so, feel free to give me the one you think is more traditional! I am open for new recipes!

Just give it a try

Once I got the recipe; the rest was as easy as can be. Most of the ingredients would be in your house already so why not give it a try as well? I do think that American pancakes tend to be a little drier in consistency than regular pancakes but that is possibly due to the fact that they are much thicker then “normal” pancakes too. In either case; both Tom and I thought they were really really good.

You can serve the American pancakes with whatever you fancy. Fresh fruit or something more savory like bacon. In fact I think they will be really delicious if you add some fruit of bacon to the filling. Banana would be awesome in combination with bacon. But that’s maybe just because it is my favorite. 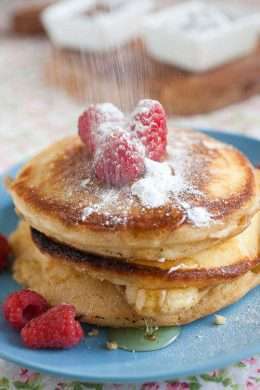 Print recipe Pin Recipe Save as favorite Saved!
2 from 2 votes