Remember how we started our pancake adventure around the world with these poffertjes? Then we moved on to Aebleskiver and blini and now it is the turn of Blintzes. The funny thing is that when I looked it up on Wikipedia it actually tells me… that it is the same as blini! But when I type in recipe for blintzes in Dutch, I am being told that they are really Jewish and not Russian. I am a bit confused so if anyone can shed some light on this I’d be grateful! I think we should definitely go with Jewish; I think someone on wikipedia is confused!

There are so many pancake varieties out there and if we are talking about a pancake of your native country, please let me know if it is not authentic or in any way wrong according to your culture. I would love to know as the internet is not always the best source of information! In our quest do bake the pancakes of the world I am joined by Nurit from 1familyfriendlyfood and Trissa from Trissalicious. Check out their posts on the subject from Nurit here and from Trissa here. And if you haven’t checked out their blogs yet, you should really do so as both ladies are extremely funny, great writers and take beautiful photos too! What are you waiting for?? Let me first start by apologizing for the somewhat blobby blob of cream on top of that little pancake over there. You know how you’re in a hurry, you’re hungry, the man is hungry and the last thing he or I want is to spend time taking a photo. But you have to or otherwise there will be no blogpost and the agreement was to make a blogpost, so that is what needs to happen. You need to take a photo, so here I am making the blintzes, cleaning the strawberries, whipping the cream and putting it all on a plate. Take a spoon, grab some cream and blob it onto your blintzes… Obviously it wasn’t supposed to be this much or this formless a shape, but I eh… didn’t pay attention.. 🙂

And no, we did not eat this as dessert, but we ate it as our main course, hence the impatience…

So over to the blintzes; to be entirely honest they tasted just like any other regular pancake we always make. So for me this recipe has really no added value. It’s just the same with the exception being that we normally don’t add vanilla so that was noticeable but other then that it was a tasty pancake. Nothing more nothing less. I gotta do some more research and maybe even make another batch of savoury blintzes this time as I am convinced they must be different.

So I will do some more research and maybe even manage to do that before the 10th (which is our official posting day) and I might even be able to make another batch and take some proper photographs this time. If so… you will see more below!

I did end up making a savoury version of the blintze tonight for dinner. And it was lovely; still no different from a Dutch pancake but lovely nontheless, so who cares where it comes from or if it tastes different from Dutch! It was good. So was the sweet version by the way; I mean strawberries and cream make just about anything taste good right?

For the savoury version I left out the sugar and the vanilla of the recipe you can find below (Thanks to Nurit for providing the recipe) and I made a couple of versions for the filling, basically using what I had leftover in my fridge. Which makes this really a good recipe to make if you have lots of leftovers. I had some ground meat, some bacon, some peppers, some spring onions, chorizo and some ham. O and we added mushrooms into the mix too. Seasoned it with various herbs (dried), some salt and pepper (not a lot as the chorizo and bacon already made it salty enough) and I added a big tablespoon of philadelphia cheese in there to bring it all together. Even Tom – cheesehater – liked it and didn’t think it was too “cheesy” or creamy.

I spread one of the pancakes with pesto, but while it was good; it started to be too overpowering. Maybe I should have added pesto into the mix with the veggies and meat. That would probably have been better. And no, it is storebought pesto (I bow in shame) but I didn’t feel like making pesto also and this is a fairly good substitute for the real thing… (Bertolli pesto genovese)

The pancakes/blintzes I made are fairly pale; I tend to get too impatient and I like mine not too browned, so I always struggle in finding a balance between the two. But they were tasty despite the lack of a bit of color.. If you want to give these a go then here is the recipe: 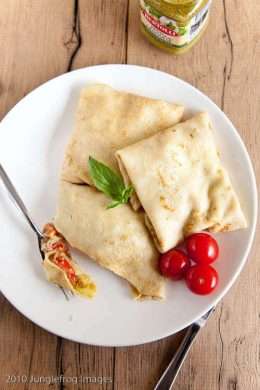 This recipe makes about 10, but it depends on how thick you are baking them
Servings: 10