This broccoli soufflé combines the best of both worlds, but including a bit of vegetables into the soufflé. How to make it? Check it here.

A slight panick broke out when I saw the challenge of this month for the Daring Cooks. We had to make soufflés…. Now the soufflé itself was not the reason for my panick attack; I mean I have made soufflé before, but only in a dessert version. But the first thing that sprang to mind when thinking about souffles is calories!! High and copious amounts of calories!

So I needed to do a little research to see if I could find a soufflé that would not undermine my weightloss. as it turned out; they are not so bad provided you do not make a giant version or eat more then one at any sitting. I even found a souffle recipe on the Weight Watchers website and decided to use that one. I don’t think it is much different from a normal version, but you can judge for yourself by checking the recipe below.

Dave and Linda from Monkeyshines in the Kitchen chose Soufflés as our November 2010 Daring Cooks’ Challenge! Dave and Linda provided two of their own delicious recipes plus a sinfully decadent chocolate soufflé recipe adapted from Gordon Ramsay’s recipe found at the BBC Good Food website.

Making the broccoli soufflé is really not so hard as some people make you believe. It’s merely a matter of having all the ingredients ready and at hand, but then that is true for nearly all recipes. So nothing new there. I’ve chosen a broccoli/ham soufflé and it was delicious! I didn’t really run into any problems although they did plummet down after rising so beautifully. I wasn’t quick enough with taking the photos, so obviously they don’t look so pretty anymore.. O well, they did taste pretty and after all that is what it is all about right? 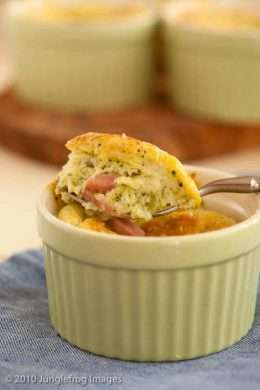