If you’ve decided to adopt a plant based lifestyle there will come a time when you maybe want to use some delicious mayonnaise in your potato salad or vegan tuna salad. But obviously regular mayonnaise is not vegan as it uses eggs. Thankfully there is a perfectly acceptable substitute that is easy to make and super delicious.

What do you need to make a vegan mayonnaise?

The ingredients that you will need for this vegan mayo are:

Optionally you can add the following ingredients to it as well; garlic powder, smoked paprika, regular garlic, lemon zest etc. Basically you can use all the ingredients you would use for a regular mayonnaise.

My first try with making a vegan mayonnaise was with soy milk. I had heard you could create a mayo with soy milk due to the high protein content. Now I am not a big fan of soy milk (not at all) but I was so curious if that would work that I decided to make. And yes it works perfectly. To my big surprise I might add. This will only work with soy milk. Do not try this with another plant based milk like almond milk. That won’t work. The problem with the other milks is that the protein content is not sufficient to get a mayonnaise like consistency. It is also the reason soy is fairly popular among vegetarians. They can use the extra protein source. But as we all know soy has a lot of other issues, so avoiding it is not a bad idea.

Officially you cannot call this mayonnaise as there are no eggs in it. Apparently it is a thing… Whatever the name, I was very surprised that this recipe worked so well. I tried making vegan mayo before with soy milk. That worked wonderful.

Someone asked if they could use chickpea (also called garbanzo beans) fluids, also known as aquafaba. I was sceptical to say the least but willing to try. And boy was I surprised! It works better than the soy version, easier too, plus I liked the taste better. Mission accomplished! The funny thing is that you can also make meringue out of aquafaba. I haven’t tried that yet but I have tasted it and you can’t really tell the difference between the real thing and the chick pea version! Magical stuff….

One thing to keep in mind that to use this for making mayonnaise you will need to make sure you have enough fluid. I initially bought two cans of organic chick peas but those had hardly any fluids in them. At the end I used glass jars with chick peas as those had the biggest amount of aquafaba. Something to be aware of. Not sure if the issue was the organic part of that there will be difference in brands. Soaking your own chickpeas is another option but one I haven’t tried yet!

So now on to making your own vegan mayo. You can then continue using it for all sorts of other recipes. You can add it to your homemade salad dressings, use it as a dipping sauce and much more.

How to make it

For making the mayo you first need a high mixing bowl to place all the ingredients in. Keep in mind that the aquafaba replaces the egg yolks so they should be added at the beginning of the process. I place the aquafaba in the bowl together with some lemon juice and some mustard. I use an immersion blender to blend them all together and then add oil.

That works the same as with a regular mayo. You add the oil in a thin stream while you keep using your blender at the same time until it has the right consistency. You want to have a thick mayo. You can also use a regular blender or a food processor if you have those instead of the immersion blender. In that case you add

I didn’t mention any specific quantities for the amount of oil as it all depends on the amount of aquafaba. Plus you can’t really go wrong if you keep an eye on the consistency. You need roughly 200 ml (or 0,8 cup) of olive oil.

If it is not thick enough you add more oil. If it is too thick you can add a bit more lemon juice or add flavor at the same time by adding apple cider vinegar.

The flavor of the mayonnaise has a pretty neutral flavor which you can easily add flavors too. You can even make an aioli out of it, by adding fresh garlic.

You can store the vegan mayonnaise in an airtight container in the fridge for about 1-2 weeks. I like to not make the batches too large so I can make it fresh whenever I need it.

Under the section where I list what you need I already have some alternatives for the oil. But you can substitute things like lemon juice for any other acid like white wine vinegar or another kind of vinegar. Keep in mind that not all acids are equally acidic. Some vinegars can be really sweet. That won’t work so well here. So make sure to use an acidic vinegar for your vegan mayo recipe.

My mayo is too thin

If the mayonnaise is too thin you add extra oil. If it is too thick you add extra lemon juice. I’ve not had it split like what can sometimes happen with regular mayonaise. But if that happens you start over. You keep the thin liquid and you start with a fresh batch of aquafaba, mustard and lemon juice. Instead of adding oil you add some of your split mixture. And working carefully you go on until all is used up or the mayonnaise has the right consistency. That way you do not lose any ingredients. 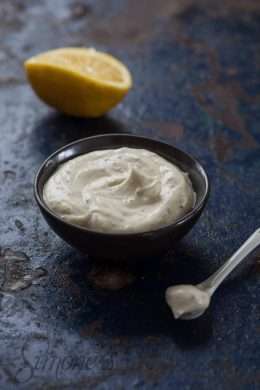 Print recipe Pin Recipe Save as favorite Saved!
2.50 from 4 votes