Recipes » Cake and cookies » The best ever apple pie recipe

The best ever apple pie recipe

The only apple pie recipe you’ll ever need

This apple pie recipe is really super simple and totally delicious. It is – in fact – the only thing you need to make. If you can find flour that is. If you don’t try and make this gluten free apple pie version instead which doesn’t use any flour.

Here’s another thing I never thought I would say but after 28 years of being together Tom and I are breaking up. I remember – ages ago – when friends of ours broke up after 25 years, I always thought that was weird. Why break up after so many years? But as it turns out it really isn’t such a strange thing to do.

We’re still really good friends, we are not fighting and no, there are no other men or women in the picture. We’ve just grown apart after all these years. And sure we’ve tried to repair the damage, but a couple of months ago we decided that we should break-up. Better now while we’re still friends than after more years and starting to hate each other.

But even though things are going in good spirits it’s still a lot of complicated stuff. We have a company together, a house and 28 years of history. Just yesterday the offer Tom made on a new apartment was accepted, so that is one important step. Now the mortgage has to be accepted and lots of other stuff is now getting into motion. Which makes it more real all of a sudden.

But we can talk about it to each other and even though it does get emotional at times, it feels good. Sounds weird maybe but that’s the state of things.

All of this has absolutely nothing to do with this delicious apple pie recipe. Sorry about that but I wanted to share this with you too. As people tend to think of us as a given or an item. But that is no longer the case! Case closed.. Haha

The recipe itself you’ll find below! 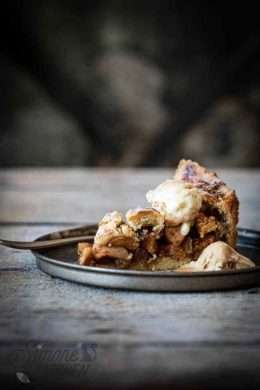