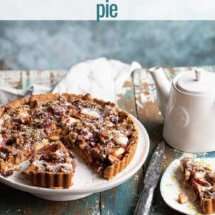 First of all I want to tell you that I love a good apple pie. With or without gluten. But since I create recipes for paleo magazine (the Dutch one) and since I love trying out new things I figured I needed to make a gluten free apple pie. One that would be just as good as the real thing. One that would no one feel deprived of anything. And let me tell you: mission accomplished!

Like with most things that you bake without using any gluten this one also is slightly more crumbly in texture than a regular apple pie, but in this case I really like the end result. And since a lot of readers have tried the recipe I can assure you that the reviews are good. Very good.

When trying to find the original apple pie recipe I have I just discovered that I haven’t shared it here. Time to rectify that soon. In the meantime you can try out these apple cardamom tarts which are also delicious!

In these weird times baking is the one thing that is so comforting and people are baking like mad. At least they do here in the Netherlands. But flour is hard to find so this is the perfect alternative. Enjoy and that regular apple pie is coming up soon!

I discovered I have quite a few recipes missing here so expect a lot more coming up soon. I am also going through all the older recipes and changing issues where I come across them. So if you find any: just let me know and I’ll try and fix it where I can!

How to make this gluten free apple pie

A couple of things to keep in mind if you’re making this gluten free apple pie. The dough will crumble much more easily when compared to a regular apple pie. So always serve a slice with a plate.

This crust is delicious and very versatile. So here I used it for an apple pie but you can substitute the apple for pear, nectarines or most other fruits you’d like. If using another fruit keep in mind how much moisture the fruit contains. Apple is fairly dry compared to – for instance – raspberries, so make sure you add a bit more raisins or other dried fruit to absorb some of the moisture. 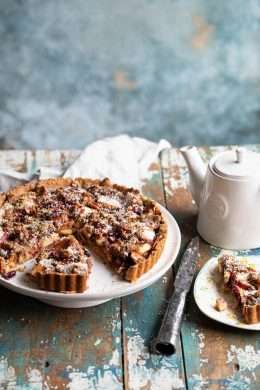 One comment on “Delicious and gluten free apple pie”