The recipe for these delicious spicy roasted chickpeas comes from the book by Deliciously Ella. A name you probably heard before. How to make this great snack? Check it below.

There is rarely a day that our mailman is not ringing the doorbell with some kind of package. In most cases I have no idea what is in the delivered package because yes, I do get a lot of stuff send to me by PR agencies. And they don’t always tell me what’s coming.

So I always wonder what the mailman thinks we do here. Will he suspect we are having some kind of illegal operation going on here? Or will he think I am a mad housewife gone on a buying spree around the world? Or maybe he doesn’t think anything and simply has no opinion on whatever it is we do here? Not that it is important what the good man thinks of us, but I am secretly wondering.

Of course I could just ask him. It is after all almost always the same guy, but I just haven’t gotten around to it. Or maybe I should follow the example of a fellow blogger who feeds the mailman something delicious every day. She gives him whatever she is cooking at the moment and he has come to expect it. Cookies, cake or whatever else is in the house. I love that. Would be a good way to get rid of some leftovers too. But our mailman is rather serious. I’ve tried to make a joke once or twice but he is always looking rather grumpy. That doesn’t necessarily invite any chatting does it? But how on earth did I get to start talking about our mailman?? O yes, I have been going slightly mad in the buying of new cookbooks. And they don’t always show up all at the same time, but are rather shipped in one at the time.

I recently bought Sweets & shoot by Linda Lomelino, I bought a couple of books on nutrition, the latest by Jamie Oliver (more on that later) and also Deliciously Ella. I was curious to get my hands on this one. Ella was a young and healthy girl who suddenly got sick and was diagnosed with some rare disease (Postural Tachycardia Syndrome) which didn’t really help as there was no cure.

After being stuck in bed, not being able to go out and do anything, she decided to see if changing her diet would help and the rest – as they say – is history. Not only did she get better, she is feeling more alive than ever before. She started her blog Deliciously Ella as a way to get herself to cook more often and to document the recipes in the hope it would make her start to love cooking. And it did. And the blog became a hit.

And so there was the book by the same title. It’s a bit of a personal story, combined with delicious recipes and ingredient information and basic recipes and so far I’ve made three recipes from the book which is a lot. I don’t tend to make all that many recipes from cookbooks, so that is saying something.

I’ve been wanting to make roasted chickpeas for quite some time and so when I saw the recipe in the book the choice was easy. I was foolish enough to wrap the bowl in clingfilm though. And those crunchy peas become not so crunchy anymore… So don’t do that but just eat them straight away! You’ll love them. I’ll be sharing one more recipe from the book later next week.

All recipes with chickpeas you can find here. Or try the recipes below: 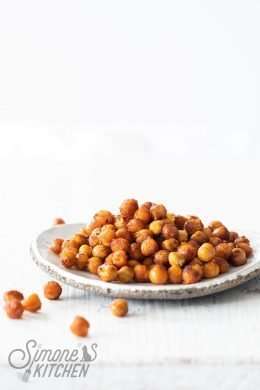