Ten years ago on this very date, the world was a different place. In a way I guess we were all ignorant of the evil that is hidding beneath the surface of certain individuals. It’s becoming a cliche but a lot of people know exactly what they were doing the moment they found out that the first plane hit the twin towers. And yes, I can still remember what I was doing. I had – in fact – just returned from the US the day before. Arriving on Dutch soil again on September 10th, flying home from Portland. I distinctly remember being in the office when one of my colleagues mentioned that a plane had hit the twin towers in New York. We all laughed about it; thinking it was a really bad joke. Until – more moments later – the 2nd plane went in and we all gathered in the tv room in the design area to watch with shock the drama that unfolded.

We all know what happened next. I cannot believe it has already been ten years ago that this world changing drama took place. There is not a lot I can say that hasn’t already been said but I couldn’t possibly write a post today and not mention this ‘anniversary’ that led to the death of so many people. I’ve been to New York afterwards, have seen ‘Ground Zero’, one year after the attack happened and even though you’ve seen it on tv many times. Going there in person and seeing the enormous hole that was once the twin towers is shocking and humbling in a way. My heart goes out to everyone who has lost a loved one in that tragedy as I am sure this date will always have a big stain on it. No matter how much time has passed. You might have seen this chana chat salad before when it was featured on the blog of my Dutch blogger friend Kay, from Kayotic Kitchen. I thought this was a fitting dish to share with you on this day, as it embraces other cultures through food.

It’s a quick salad and works perfect with this homemade Garam Masala that I shared with you earlier. 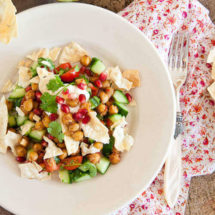