Delicious combination of rhubarb and strawberry that is the best way to preserver an abundance of produce when they’re in season! Try this rhubarb jam for yourself!

I absolutely love rhubarb. Whenever the season comes around I try and incorporate it into lots of different things. I bake cakes (like this almond flour cake, hazelnut rhubarb cake) or rhubarb bread pudding. However, making jam is not something I do very often. Not because it is insanely difficult to do but it is just one of those things that I never really get around to doing. But I’ve been into a rhubarb flow lately and after making loads of cake and other rhubarb things I thought it would be best to transform the rest into rhubarb jam. Now here in the Netherlands, there is an official rule that tells you that you cannot call something ‘a jam’ when there is less than 50% sugar in the mix. Which I think it really weird. 50% is an insane amount of sugar and I like my jam to be more fruit than sugar.

And let’s be honest; there is more than enough sugar in this version as well. No need to add any more. In order to lessen the amount of sugar but still get that jammy feel, we incorporated pectin into the mix. This makes the jam still become that specific jam consistency. We only used a total of 220 gram of sugar to 1200 gram of fruit. So that’s a lot better than the standard ratio. You can add more sugar to the rhubarb jam if you want. Just taste and see if you need more. There is also a difference in the sourness of the rhubarb so it could very well be that some need more sugar than others.

Looking back our rhubarb jam was still a bit on the thin side. I’m not sure if adding more pectin would have solved that issue though.

In order for the jars to sterilize you need to heat them properly. The easiest way I find is to first preheat the oven to 160˚C. Then wash the jars in soap and hot water. leave them to dry on an ovenrack. Place in an oven once dry and ‘bake’ for 15 minutes. Don’t forget to also include the lids of the jars in the process.

Once you put the hot jam into the jars, place the lid on and turn the jar upside down on a tea towel. Leave to cool this way and store for about 6 months in a dark place. 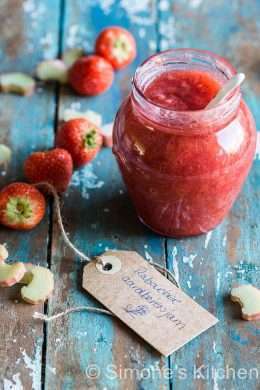 When properly sterilized (see notes below) you can keep the jam for up to a jar unopened. Once opened, keep in the fridge and eat within two weeks.
Prep Time: 15 mins
Cook Time: 30 mins
Total Time: 45 mins
Servings: 4 jars

6 comments on “Rhubarb jam with strawberries”