Remember all the way back to a couple of years when I decided it would be a great idea to start making all the recipes from one single issue of Donna Hay Magazine and post them here? Well, let me start by saying that I was a bit ambitious. In the magazine where about 8 different bread pudding recipes and also roughly 6 whole chickens. I got to number 25 eventually. Out of a total of 80 recipes.

Out of all the recipes the bread pudding where definitely among my favorite recipes. So delicious! This rhubarb bread pudding was originally made with raspberries. So you can use that if you prefer above rhubarb. But since I love rhubarb and it is the rhubarb season, I figured now would be a perfect time to repost this delicious recipe.

Once you know how a bread pudding works, it really is not that complicated. You basically fill an ovendish with slices of brioche that you either cut or – in this case – roll and which you have brushed with a flavor of your choice. I love using lemon curd as you can see in this bread pudding with lemon curd but using the raspberry curd makes it less tart.

If you can’t find raspberry curd you can easily replace this with raspberry jam, which is more readily available. Jam will work just as well. Or you can substitute with lemon curd also. This recipe is essentially a basic recipe for bread pudding that you can tweak according to your liking.

What bread to use?

You can use any kind of bread in a bread pudding. I like to use brioche most of the time. That makes it a bit sweeter, but you can even use sour dough bread if that’s what you have available. The key is to try and use bread that is somewhat stale. Perfect for using up leftovers.

That said; I do use fresh bread too if I don’t have leftovers. And that works just as well. The end result will be somewhat softer. You can serve the rhubarb bread pudding with whipped cream, or with a bit of vanille icecream. That’s delicious when the pudding is still a bit warm. 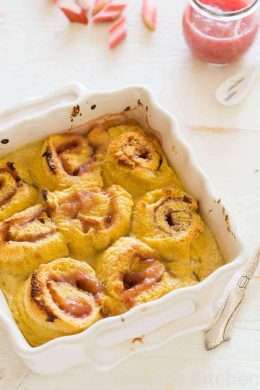 I used raspberry curd for this recipe but you can substitute it with raspberry jam or even lemon curd if you want.
Prep Time: 20 mins
Cook Time: 35 mins
Total Time: 55 mins
Servings: 8 people