Pasta salad with gorgonzola and tomatoes 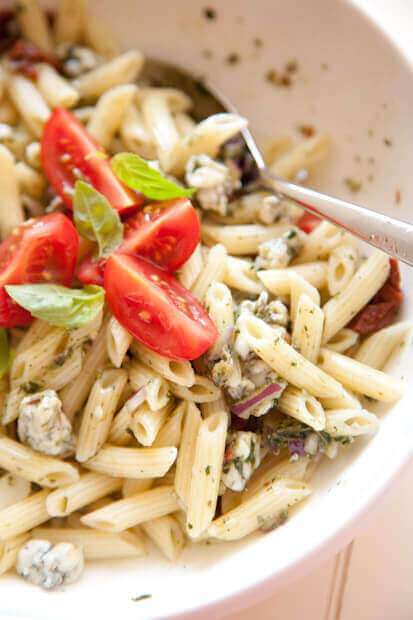 I had some leftover stuff in the fridge which I wanted to use for a lunchsalad for this afternoon. I had seen a recipe in the goodfood with leftover pasta… Ofcourse I did not have any leftover pasta, but cooking some fresh was not really a problem ofcourse… 🙂

That’s one of the things I love about being at home during the day; I get to make things you wouldn’t be making in an office! Man, what did I get there other then stale sandwiches…? Well, ok, that is really untrue as we had a fabulously big cafetaria where you could get salads and all sorts of other stuff, so I shouldn’t complain but somehow the food you make at home is soooo much better. Plus – let’s face it – even the best cafetaria in the end serves the same food most of the time… And it’s just not exactly to your own taste, plus it is kept in those warm bins for too long usually. 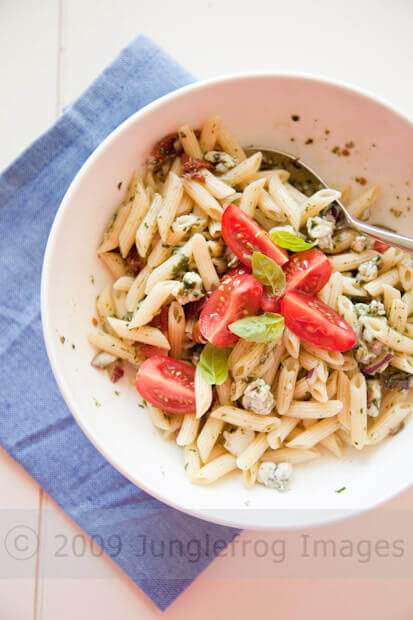 I’ve been having a rather strange day today… All due to the fact that some kind of lunatic is sending deatthreats to Tom via email. He is convinced that Tom slept with his wife…. Now most of you don’t know Tom in person, but I know for a fact that nothing could be further from the truth. And we have a strong suspicion that the wife (a former colleague of Tom) has come up with that story to cover something else. I don’t know… whatever the case is; this guy is seriously mental and potentially dangerous.

He started by sending messages on the fishing site Tom is on. Then he started sending an email to Tom and this morning he started sending emails to me. Quite innocently pretending he wanted to have photos taken of his kids… Ofcourse I asked him what the hell he was doing and never got a normal answer.(I did get a lot of not so normal answers…)

Anyway, I will spare you the full details, but let’s say that it is very unsettling especially since Tom has absolutely no idea what he is talking about. We’ve both been trying to call the woman in person but she is not available. And leaving voicemail messages sofar has not had any response.

The police will possibly need to become involved soon too if this doesn’t blow over… It’s ridiculous and very scary too… We’ve already called the police for advice so we’ll wait one more day and press charges if it’s still the same tomorrow.

How weird can it be right? I am not sure if writing about it here is wise, but I just had to get it of my chest and it’s unlikely he is gonna be reading my blog… Fingers crossed this will not end in drama!

Pasta salad with gorgonzola and tomatoes

O and for the salad… I tossed together gorgonzola, tomatoes (dried and fresh) and for the sauce capers, pesto and a little bit of red onion chopped finely. Delicious!

« Previous PostPasta with sausage, beans, peas and mint
Next Post » Bagel with creamcheese and smoked salmon