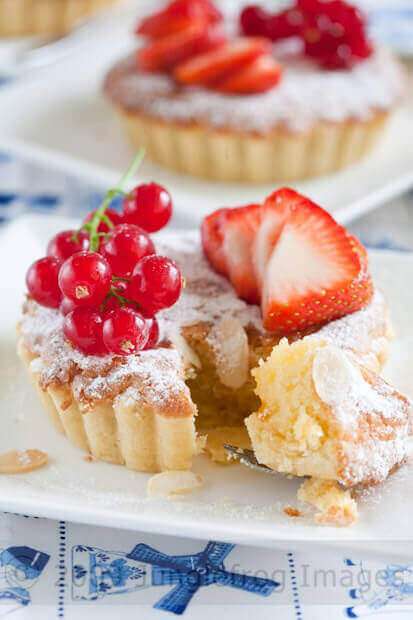 The June Daring Bakers’ challenge was hosted by Jasmine of Confessions of a Cardamom Addict and Annemarie of Ambrosia and Nectar. They chose a Traditional (UK) Bakewell Tart… er… pudding that was inspired by a rich baking history dating back to the 1800’s in England.

Let me first start by saying a big thank you to Lisa! I know the reveal date for the Daring Bakers is the 27th of the month, but for some strange reason it had gotten stuck in my mind that it should be the 1st. So I was planning on baking these goodies on the 27th. Thinking I would have plenty of time to take photos the day after… How wrong was I!! Lisa made a comment on one of my other posts saying she was curious on how my bakewell post would turn out.. At which point my alarm bells started to ring…Oops… 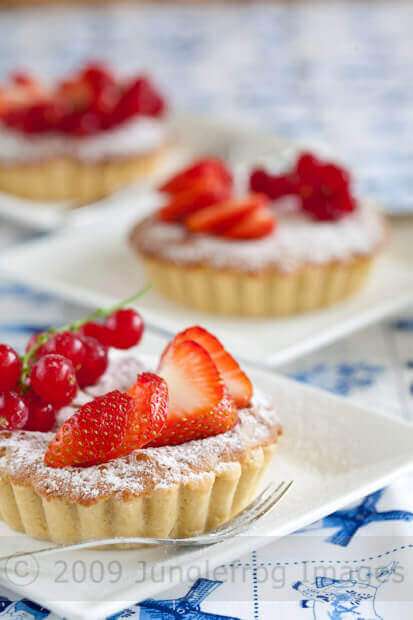 The one good thing was that I had been planning on baking them this afternoon anyway, it was just all a bit different than I thought and I would have stupidly posted them a couple of days too late if it hadn’t been for Lisa. So, big thanks Lisa!

As we speak the shells are in the freezer cooling down, but I thought I start writing about my bakewell adventure already now. So will write along as they – hopefully – become ready.

I had never made Bakewell tart before, but I have said the same thing of every Daring Bakers challenge sofar, so maybe I should find a more original line. Haha.. It’s true though. Our baking adventures when I was a kid didn’t go any further then appletart and regular cake. Ofcourse I have baked various other things since living on my own, but there is still loads and loads to learn. As was also the case with this fine exampe of baking.

I started with a slight problem on the butter becoming soft too quickly. As luck would have it, it is an extremely warm and humid day here today. The kind of day you have before a giant thunderstorm (which is what is predicted for the weather later today) so any ingredients that were cool coming out of the fridge warmed up fast. My hands didn’t stay cool for very long either, so I don’t think that helped when grating the butter.

Mixing the ingredients for the Frangipane was straightforward so no surprises there, although I was very happy that they mentioned that it would look a bit curdled. I would have been worried otherwise!

I kept the dough in the fridge for slightly more then half an hour but as soon as I tried to roll them out with the rolling pin, it was pretty obvious that that wouldn’t work. O… gotta run downstairs again.. 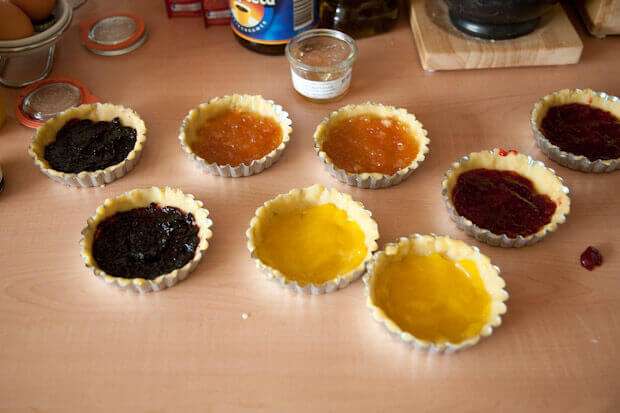 So the tarts are in the oven now… Ok, where was I… Yes, so when rolling it out, or trying to roll it out it broke instantly. Basically falling apart. So instead of rolling it out; I grabbed a bit and pressed it into the tartforms, making sure to make the dough as even as possible, although I am sure it is not quite.. 🙂 I am not sure what I have done wrong. Possible not cold enough? Would that make it ‘unrollable’? After having them in the freezer for 15 minutes I filled them with various jam-flavours. I did not go for the homemade option. I have made jam once before and thought it was quite a nice thing to do, but I am not a big jam eater so I thought the store bought option would be better. At one of my favorite shops “Dille and Kamille” they sell tiny jars of jam, so you can buy different kinds and still not be stuck with loads of jam. I chose Apple-cinnamon, blueberry, raspberry and I found lemon curd as well (not easy to find here) so I used that too. Not 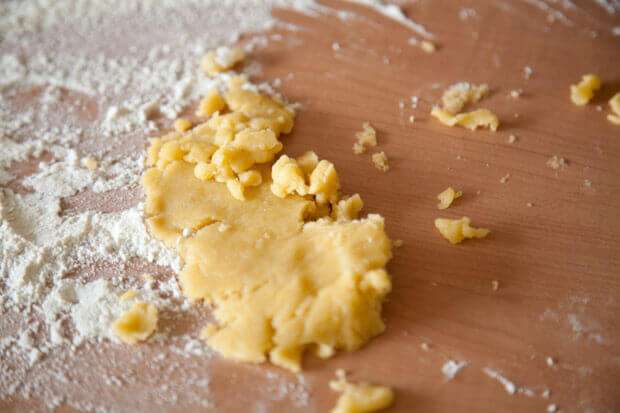 sure how the lemoncurd will come out, as I’ve never really used it before. But I love the tangy flavour so am thinking it might be good.

O my god… Those little things turned out to be absolutely delicious. I was a bit anxious that they wouldn’t come out right, as our oven is not the best and half of the tartelets are actually on the too dark side, but just slightly. It just heats unevenly.

After half and hour they were done and ofcourse I managed to throw one on the floor while getting them out of the oven. And why does that always happen with one of the yummiest flavours?? I love apple/cinnamon but that was the one I dropped.. 🙁

The one I just ate was the lemon curd and it was delicious! The frangipane has come out really nice and light and wonderful in texture and flavour and the crust is – I think – how it is supposed to be.. Love it!! Thanks to Jasmine and Annemarie for hosting this one!

Here is the (lengthy) recipe.