I have the same idea every Christmas. I will not be eating too much these days; I will have a regular breakfast, I won’t do any lunch and for dinner I will not be stuffing myself. Soooo… that never worked sofar. The problem is that I just about like everything! Everything except oysters and maybe shellfish in general (think mussels, oysters, clams and such) Christmas day is simple; we’ll be doing gourmet with friends and I just have to make dessert. Boxing day my father in law will come for dinner and we’ll cook.

And to prevent us eating too much at the very first course of the evening (the brakes don’t seem to work all that well with me) it seems like a nice thing to have a good soup as a starter. Made with fresh tomatoes, red bell peppers that we quickly roasted on the stovetop (see tip in the recipe) and to make it special we added gorgonzola creamsauce for in the soup. With just a bit of thyme. The cream is not exactly light but you add just a tiny bit into the soup so that’s ok to do! 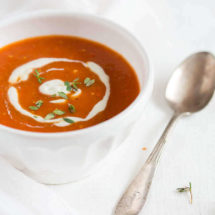