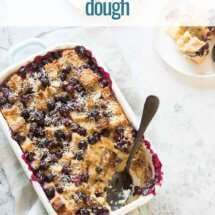 While you can typically use just about any bread for a bread pudding. Making it with sour dough gives it that extra bit of flavor and texture.

Did you know that I have a big weak spot for bread pudding? Or maybe I should begin with telling you I love bread. It’s just so good. And while bread has gotten a lot of bad publicity the last couple of years I still think good bread is delicious and not so bad either. Yes sure a factory produced loaf of white bread is filled with sugar, preservatives and other stuff but I am not talking about all that right now.

Take sour dough : I think most people would agree that it is the best bread you can possibly eat. Even Michael Pollan agrees 😊 Ideally home made but that is a skill I have yet to master. Or may be I just don’t allow myself the time it takes to make a bread.

Buying it from a baker – a good baker – must count too right? So the other week I had bought a whole wheat sourdough bread but had quite a bit leftovers. And with good bread, it has less preservatives and therefore gets older a bit quicker than that white loaf.

I usually have brioche for that or raisin bread. But since we had the bread we figured why not give it a go? And it was surprisingly good. Not for one minute did the type of bread diminish the taste of the bread pudding. And while it can hardly be called a healthy dessert at least it must be a little better now right? 😉

The good thing about using the sour dough for this bread pudding is the fact that it gives it much more texture. If you use brioche for instance, the bread gets much softer and almost melts in your mouth. Which is nice in a whole different way from the sour dough bread pudding. I love using it with lemon curd to give it that bit of tartness. But you can substitute any kind of jam if you like it sweet.

I tend to go for that bit of freshness from the lemon, although that’s relative as lemon curd itself is also pretty sweet.

In order to use the bread it would be ideal to have bread that is maybe one or two days old. As a good sour dough does not have a lot of preservatives it get old quicker. So two days is usually more than enough. And there is no need to wait for the bread to get stale. You can use it fresh as well. No problem.

Not looking to make a bread pudding with sour dough? Try this one instead with blue berries and lemon curd. 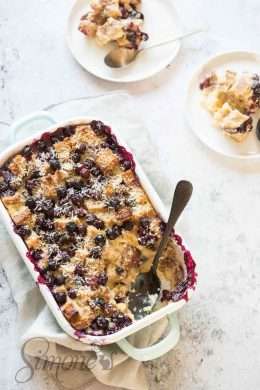