You might think that I picked the Donna Hay issue I am cooking from for the pure reason that it has a lot of bread pudding in it… It would have been an excellent reason but sadly it isn’t why I picked it… Well maybe until I tasted the first one… Insanely good! But I am a breadpudding fan so maybe that doesn’t count.

As usual I had made way too much and brought a part over to the neighbours. I received the empty bowl back with the note that the two neighbourly girls didn’t like it, but their mother liked it all the more. Can it be the lemon curd? It is quite soury/sweet ofcourse but that is the exact flavor I love.

The recipe states that it needs to be made with brioche and that is – by itself – already quite sweet. Maybe it is better to make it with regular bread, because the lemoncurd adds more sugar to it. Whatever bread you will use it’s gonna be delicious anyway.

So I can chat about long or short… I just say; go and make it! (and there are more variations to come soon!) 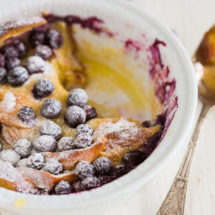