This dude is not a big fan of salads. And for a short while now, I know why.
It’s not the fact that all the green in salads is not dudelike. Au contraire: one of the most famous megadudes is green; The Hulk.
I can even appreciate the happy and colourful palet of a salad (saying this without wanting to sound like some softy interior designer). The thing that doesn’t appeal to me in salads is that I am always looking for a specific Dude ingredient in vain; protein aka good meat.

Anyway, two weeks ago I was very sick as I mentioned to you last week. And boy did I get the full brunt of it by the Misses. She immediately started lecturing that eating more salads is much better for building an immune system, which statistically lowers my chances of becoming ill. Followed with that, my eating a lot of unhealthy (read: dudey) food, is close to literally asking to become sick and that it was my own fault that I was caught with the flu etcetera, etcetera, etcetera (in a tone as only Yul Brynner can say)
She kept on nagging until I promised her that I would make a salad more often. And this week I will keep my promise. I will make a salad, but with a typical Dude ingredient: steak!
Steak makes a dudey salad from everything green and raw. Especially when you add some nice pasta. 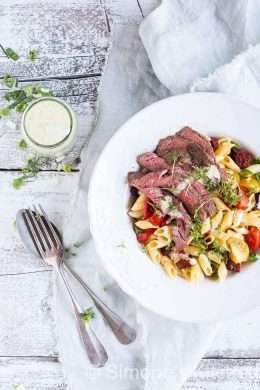 Pasta salad with steak and chorizo

6 comments on “Dudefood Tuesday: Dudey salad with steak and pasta”