I have to confess that – despite the fact I put it all together myself in the blender – I had my doubts about this kale smoothie. I mean… sure I like kale but mostly in a mix with mashed potatoes, bacon and a smoked sausage. Not necessarily in a drinkable variation. But sometimes you have to think outside the box and so I added a good handful of kale into my blender. At first glance there was  bit too muck kale left. It didn’t blend all that wel;. The trick to solve that turned out to be adding enough fluid and blending the kale first before adding more ingredients. And in case you’re wondering; the kale is raw. No need to cook anything first. What you’re left with is a enormous powerboost. Perfect to start the day or why not use as a lunch? I added maca powder to it. Macapowder is made from the root of a plant that is originally from Peru and is claimed to have all sorts of healthy benefits and magical powers, one being an influence on fertility and libido.. That last fact is most likely the reason why the production of maca has taken an enormous flight in Peru. There is however little scientific evidence to support this claim. Not sure what is true and it looks like no one really knows for sure. But since it is also reported to help with energy levels it seemed a perfect addition to this green smoothie. I do think that most green smoothies need a little bit of sweetness to be edible/drinkabe. Since drinking kale somehow doesn’t sound all that appealing but add a bit of fruit and bingo! 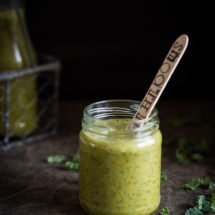