Weird really, but everytime Esmee and I get together for a cooking session we end up cooking Asian. It doesn’t matter at all what we had planned originally, each time it turns out entirely different. If I am not mistaken we we do ‘something with fish’ this time. Uhu… do you see any fish in this soup? Nope… Not a fish in sight. But it doesn’t really matter what we make, it is (almost) always really good anyway…

How we got from fish to the soto this time… I honestly do not know, but the result is a delicious soto ayam. Chicken soup. Soto is Indonesian for soup and there are many different varieties out there but this is the one most commonly found. And no, I am pretty sure it is not entirely traditional or typically Indonesian, but you know what; that is fine too. It is delicious and that is what counts! I am pretty sure there are as many varieties of soto in the world as there are islands in Indonesia but the base seems to always have chicken and an egg is usually there too.

In terms of flavor it is nothing like a Dutch chickensoup and quite frankly I prefer this option. But try it for yourself and let me know how you like it! 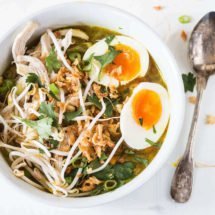