These creamy rhubarb tarts are super easy to make and just need some time in the oven. How to make them you will find below.

Those of you who know me a little better or those of you that have followed me a little longer, might know that I have not always been in the same profession. Lord knows I have had just about as many different jobs as anyone wants to have when I was younger. I made it my pride to be a job-hopper. The longest position I had been in for the first 10 professional years of my life was maybe 2 years.

However, one of my most memorable jobs must have been starting out as a student nurse all those years back in 1982. I was 19 at the time and as green as grass. My parents have always been fairly strict. I went to parties at our local high school but that was about the experience I had with ‘disco’s, partying and the like”. In that day and age it was a rule that you had to live in the sister-flat if you started your education. It’s all changed nowadays but when I started out you had to study for three months, then do an internship at a hospital, go back to school and then work some more. The majority of the time was spend in the actual hospital that hired you as a student.

I was a very shy girl when I went into that sister-flat but I did meet a lot of nice people pretty quickly, some of which are still my friends today. We all had a tiny room of 2 x 3 meters which was our home. Put a bunch of girls together in a house and you’re bound to have mayhem so there had to be rules. No men were allowed in the house after 11 pm. No booze was allowed in the rooms. And we had a very very firm mentrix overseeing us all. Let’s call her mrs. S. She was pretty terrifying and she either liked you or she hated you. It doesn’t take a lot of guessing finding out in which category I was placed.

My friends all had boyfriends and our rooms where situated close to one another. I was – having grown up in a protected environment – still a virgin so it soon became a bit of a joke, me being the ‘eternal virgin’… (hey, I was almost twenty years!) It didn’t really bother me a lot to be honest so I just joked along with the rest of them.

My room was the only one facing the hospital. So if you would be working in the surgical ward we all worked in, you could literally look into my room. Not a good thing when you have someone like Mrs. S watch your every move like a hawk.

The boyfriends of my friends would drop in to the flat to see if there girlfriends were home. Remember this was the age before we all had Iphones to register our every move, so without a phone in the room, it would always be easiest to drop by and see if someone was home. Quite often they were gone, so the guys, whom I had met and got along quite well with, would drop in to my room for a cup of tea and a chat before saying goodbye again and moving on. This would always happen during the day. Broad daylight so my curtains were mostly open. No reason to sit in the dark, right?

Imagine my surprise one day when I got back from work, still in my uniform and pretty tired, when Mrs. S was waiting for me in the hall. “Come with me young lady.” She said in her usual aggressive and scary tone of voice.

My mind started racing and thinking what on earth I could have done wrong this time while I walked with her to her office. She opened the doors and imagine my surprise when my parents where sitting in her room. I was a little shocked, not knowing what to think but I was gestured to sit down and shut up.

Mrs. S. then proceeded in explaining, in front of me and my parents, that she was very concerned about my behavior. I had a lot of male visitors, I drank booze in my room on many occasions and I sometimes got home at 6.30 am. In short, she was basically saying I was some sort of whore and she had alerted my parents to this fact. I was completely and utterly stunned. The only part of her story that was true was the last part; I did get home sometimes after having been out really late. We would go dancing for the entire night with friends and come home, well yes, very late. But we were young, living on our own for the first time, so who could blame us right? Wrong…

I stammered and I stuttered which I am sure convinced her and my parents of my obvious guilt. The fact that I blurted out that I was still a virgin was obviously just a tactic trying to get them of my back. I did not drink alcohol at all at that time. I hated beer and thought wine was just mediocre, so I didn’t drink, but I did have the occasional beer in my tiny fridge for when I had visitors. It appears mrs. S was close friends with the headnurse of the ward where I worked who -clearly – could spy and look into my room. She must have seen the guys coming over and having a tea (not whiskey).

One of our fellow students who had a room next to mine, M., was a very timid and weird girl. But she was high on the list of favorites of mrs. S. so I did not have the heart to tell her that M. was the one who brought in all those bottles of booze (which she probably found empty at some trashcan)!

I got a really serious warning that afternoon. If I would not get my act together I would be thrown out of the program altogether. I was so mad you can’t believe it. Being caught is one thing, but being blamed for something you obviously did not do, was beyond me. My parents, unfortunately, believed mrs. S and it is still the reason why they look at the friends of that period with mixed feelings. They still think I did all those things. And they blame my friends for that… Ridiculous but true. Not that we ever talk about it, but I just know.

My friends and I; well we had a really good laugh about it later on and they had something else to tease me about.. 😉 Thanks goodness for friends!

Obviously this whole story doesn’t have a lot to do with this delicious and easy rhubarb tart. Except maybe for the fact that mrs. S. was definitely a terrible and horrible old tart. So I guess that was my way of being reminded of it.

Making these rhubarb tarts is really super simple. I use ready made puff pastry for these. Here in the Netherlands they are sold in package with squares that are roughly 10 cm by 10 cm (4 x 4 inch) and are perfect for making the rhubarb tarts.

Making the rhubarb tarts is simple. The only thing you need is some creme fraiche, obviously rhubarb (make sure you get the pretty pink variety), an egg and some sugar. I like to keep the creme fraiche base simple, but it is also delicious to add a bit of lemon to it. How much sugar you use is personal. I sprinkle it with a bit of sugar before placing it in the oven. Baking it will cook the rhubarb. Add more sugar if you feel you want it sweeter. I like my tarts to be tart.. 🙂

Also check out these rhubarb recipes: 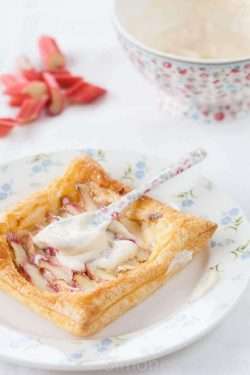 These easy and delicious rhubarb tarts are made with puff pastry and only take a short time to prepare
Prep Time: 10 mins
Cook Time: 25 mins
Total Time: 35 mins
Servings: 4 people