The recipe I am listing below is a recipe for making pizza dough from scratch. it’s taken from the book by Marcella Hazan. Obviously top your pizza with whatever strikes your fancy!

How to make pizza dough

Let me start by making a confession; I am not a big pizza fan…. Maybe I should be reconsidering that, since my studio is actually located above the infamous New York Pizza chain!! 🙂 It also tends to be the first thing that people ask me when they first come to the studio; if I eat a lot of pizza… ?

Well, the answer would be no. NYP is only open from 4 pm anyway and I tend to be gone by then, so they wouldn’t be able to serve me pizza even if I wanted them to!

Pizza or no pizza?

But in general I have always thought of pizza as a second rate Italian meal. I mean; if you can have gorgeous pasta, delicious meat, fish or whatever other dishes, why settle for something as basic as pizza?? I don’t know… we sometimes order pizza, but the ones you tend to get are greasy, too thick or too thin, not cruncy and in general not really very good. Tom loves them, so we do order pizza sometimes, but then I order pasta carbonara… which is actually also horrible, but you know sometimes convenience wins from culinary delights… 🙂

However; once I discovered the delights of homemade pizza dough I had to reconsider my love/hate relationship with pizza. My track record with dough is not too good. I just tend to be too impatient to wait for the dough to be properly kneaded but I started making the pizza dough with the Kitchen Aid. And finished by hand. Surprisingly enough the dough was rising just fine and the end result was totally delicious. This recipe make a total of two 30 cm pizza’s.

If you want to make a perfect pizza it is worth investing in a pizza stone. I previously had one bought from Jamie Oliver and it’s not too big and clunky to keep and works a treat. Ideally you would also need a pizza paddle. But when you don’t have that, try and use a baking tray or similar flat surface to transfer the pizza to the hot pizza stone.

For the best results you will need to heat the pizza stone in advance in the oven. To make the transferring easier use plenty of semolina under the pizza dough so it will slide easily from the baking tray onto the baking stone.

Alternatively you could make mini pizza’s as those are so much easier to handle. And probably just as delicious.

The pizza ended up having a delicious thin and crispy crust and I loved it. So the key to loving pizza I now learned is making your own pizza dough. Follow the recipe from Marcella Hazan below and you can’t really go wrong!

Check out these pizza recipes as well: 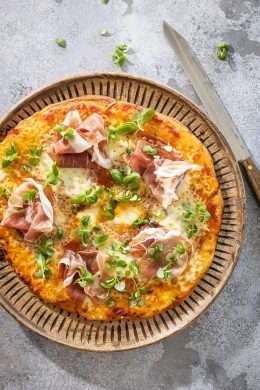