I bring you ill tidings, my fellowdudes!
This time of year is a terrible time for the DudeFood kitchen.
As if we had not tightened our belts enough in the persistent economic recession, this month our house is under the tight reign of losing weight.
Ok, it’s January so it is quite obvious that especially the Misses is running high for low carbs and such.
Here are three keywords which rule at this time of year in the Misses little red book: January, resolutions and diet.
Usually you can capture my answer also in three words: Yeah, right and NoWay!

But since the weatherforecast predicts harsh weather this time and I don’t want to sleep outside in wind and rain, I didn’t protest too much to the upcoming ‘no fat tyrrany’.
After all I know this dietsong by heart after hearing it for several years now, so I made my arrangments in December already and bought a variety of snacks at the end of last year.
These snacks were meant for when my Dudefriends come over and want to eat something. And when they want a snack you will definitely lose your Dude status when you must serve them cucumber of lettuce for lack of proper Dude snacks.
And because I didn’t want to disturb the Misses in her focus on ‘healthy’ I put these snacks away in some place were the Misses normally doesn’t look for food.
Don’t get me wrong on this one: This is not a case of hiding snacks, it’s more a case of helping the Misses in not straying from her low calorie mindset, because she stumbles on tasty treats.
But now for the ill tidings: Yesterday, by chance the misses stumbled on my hidden stash of dudey goodies and she threw them straight in the bin.
And to complete the drama, the Dudefriends will come today and I don’t have any Dudeworthy snacks to sooth these blokes.
In sheer terror I razed the fridge and cupboards and came up with some ingredients which could save my Dudey image.
I give you the recipe for a naan bread pizza. A fast, easy and tasty snack to serve to your friends. And when you throw in something like: “fusion from Italian and Indian cuisine”, it even sounds like you mashed up these things on purpose. 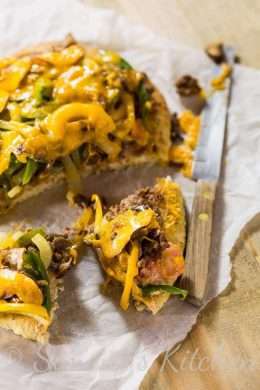