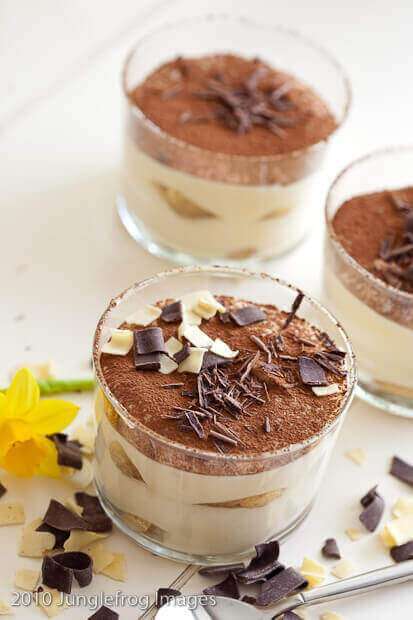 I was quite excited when I read what the Daring Bakers challenge for this month was gonna be… Tiramisu… And it would be hosted by two of my favorite blogs! Tiramisu is an old time favorite in this household and in fact something I make almost every year for New Years when we go and visit friends. It’s become one of those things where people are really disappointed when you do not bring a bowl full of the creamy goodness. My recipe for tiramisu is quick and simple and I might share it some other time, but for now let’s focus on the DB tiramisu!

The February 2010 Daring Bakers’ challenge was hosted by Aparna of My Diverse Kitchen and Deeba of Passionate About Baking. They chose Tiramisu as the challenge for the month. Their challenge recipe is based on recipes from The Washington Post, Cordon Bleu at Home and Baking Obsession.

For this challenge the mandatory things to do where to make our own ladyfingers and… to make our own mascarpone! It’s one of those where you seriously have no idea how things are made. Ok I realize that mascarpone is dairy but that doesn’t mean anything. Little did I know that it would be straightforward to make (I did not think it was that straightforward while making it but trust me things turned out to be different then expected!) I started making all the various parts of the challenge on the sunday so I would have enough time for the tiramisu to be assembled and then photographed as well. I started by making the pastry cream and the zabaglione, which were both very easy to make. Next was the ladyfinger batter which was also not difficult to do except for the fact that I felt that they became soft rather quickly even though I kept them in an airtight container only for one night. It didn’t really matter ofcourse since they were gonna be soggy anyway but still. It did suprise me and on second thought I might have had to keep them in the oven a tiny bit longer to get rid of that issue. But then who knows? I also didn’t make enough of the cookies. I didn’t count them and figured I would have enough for what I wanted to do so I didn’t finish all the batter. Mistake…! 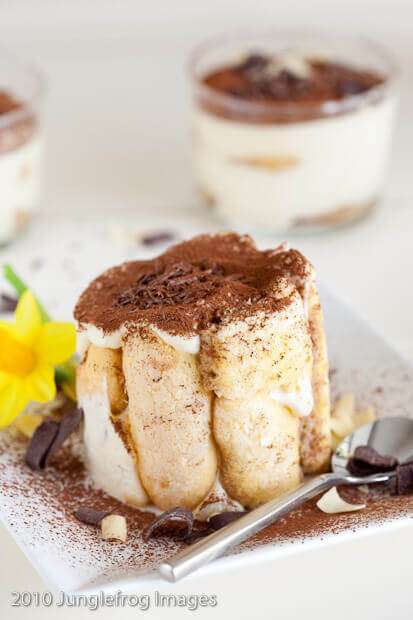 Not a major disaster and I managed with what I had but just barely and would I have had more cookies it would have been easier to divide.

When the cookies where in the oven I started on the mascarpone making, which is essentially cream that needs to be cooked till 190 degrees F. I used a double boiler as per the recipe but the warming up took for-ev-er and once bubbles tried to break through the surface I added the lemon juice as per the instructions and that is where the cream should have started to curdle. Now…. that is one of those words that I think I know what it means but it might actually be something else; in which case I was waiting for something that would never happen…lol… In any case it was supposed to get thicker and that it did not do. No matter how long I waited and no matter that I turned the heat up a bit, adding more lemon juice.. All to no avail. After what felt like a century but what was in fact something like 45 minutes I gave up and figured I just dump the stuff into the sieve and see what would happen the next day. I didn’t have cheesecloth so I used a cotton teatowel instead. I read on the DB forum that I was not the only one having issues with the mascarpone, so I dreaded the moment the next day where I would find only a little bit of cheesy goodness left and a major amount of fluid under the sieve. 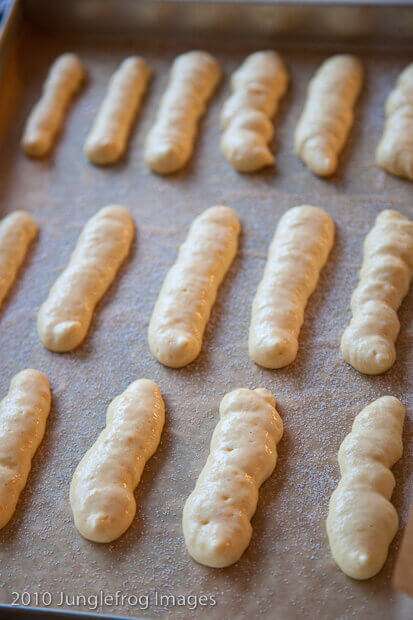 So guess my total surprise when I peeked into the fridge the next morning to find a perfect batch of creamy and delicious mascarpone! 🙂 Magic… pure magic… It had the right consistency and if anything, was even slightly firmer then the storebought varieties and the taste was good too.! I had honestly already agreed with myself that I would use storebought if it was a total drab, but this was ofcourse even better!! 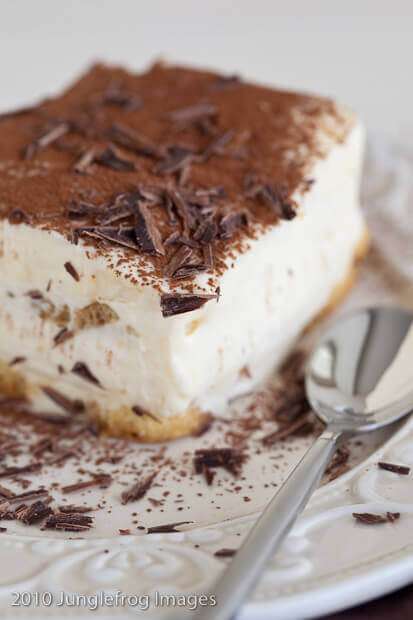 So with the mascarpone successfully behind my back there was really nothing holding me back from assembling the tiramisu. O I have to tell you that I do not like rum or marsala so whereever the recipe called for something alcoholic I used amaretto instead. Ever since I started making tiramisu I have used amaretto instead of the regular rum. And believe me when I say it is irresistable. Really, really good. It gives it a slight almond flavor too. But then I love amaretto so you might not like it so much if you don’t like amaretto.

I wish I actually had a before and after picture of the mascarpone but I didn’t feel like taking a photo of the cream as it really did not look any different from when I started, but as you can see on the ‘after’ photo; it is looking good!!

For the dipping of the ladyfingers I used again amaretto and not so much sugar as the recipe said either. I am used to not using any sugar at all for the dip, so I just added a tiny bit in and diluted the coffee with about a tablespoon of amaretto. 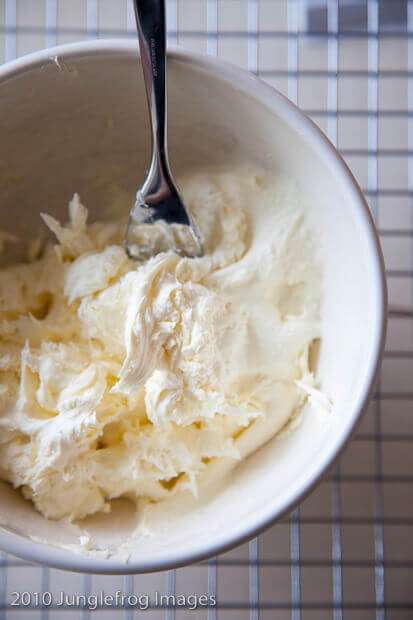 I could really not dip both sides of the tiramisu since that was just too much liquid, plus I don’t like those soggy tiramisu’ that you buy in the supermarket… Yuck…! I wanted to try a variety of forms, but I actually like the glasses the best. Not only because it stays together but I love to peak through the glass and see the ladyfingers there; hiding. I did the glasses, one round form and one square… The ring of the round one should have been a little wider as you will see in the picture somewhere below; because the ladyfingers got wet so quickly they also got quite limp so it was difficult to keep them up as I wanted to have a ring of ladyfingers around the outer edge on the round form. Right now it looks kind of weird and wobbly (but hey, definitely homemade!)

And then for the most important part; the taste… O the taste… I can’t find much wrong with the taste. In fact I absolutely love it. It has a very slight lemon flavor which I love and overall this is a really really good tiramisu. Truth be told; I will probably stick to my regular tried and tested recipe as it is a zillion times quicker and tastes just as good. I did love making my own mascarpone and after that fear of failure it turned out to be pretty straightforward as I promised you!

Now for all who want to try this; here is the recipe(s)!

« Previous PostTagliatelle with saffron, bacon and peas
Next Post » Tomato bruschetta and pasta with cream and sausages; Cooking Italy!