With all that sweet stuff you see passing here lately you might begin to wonder if I ever eat anything savory at all. Well yeeesssss, ofcourse! How could you even think I didn’t? As I told you I got the beautiful book Lemongrass and Ginger Cookbook: Vibrant Asian Recipes

by Leemei and decided to make two recipes out of it. Well, two to start with; I am sure I will be making more then just those two!

The first one, the steamed rice cakes, I already told you about last week but I also made a delicious and healthy starter. Sort of to counter all that sweetness… I picked the tuna salad, also originating from the Philippines. The recipe takes literally less then 30 minutes to make and that is including the marinating time, so perfect for when you have little time but still want to put something good on the table.

The tuna itself was melt in your mouth tender once it was ‘cooked’ in the lemon and lime marinade. It’s not as acidic as you would expect as most of that is being soaked up by the fish. I can still remember making my first ceviche. I really thought it would be incredibly sour. You know that experience when you eat or drink something and it is so sour that you cannot stop your face from going all weird on you? That’s what I expected but it wasn’t. Fish and acidity have this funny effect on one another.

In terms of styling I struggled a little bit with this dish as I am sure you can tell. I don’t know if chopsticks are used at all in the Philippines but that’s what I used to eat it so don’t judge me too harshly if that is all wrong. I also now that the newspaper that is under the bowl is not from the right area but I preferred the newspaper above the white background I had done earlier. Plus I was not so much in a hurry but I was rather hungry so instead of spending endless amount of time in getting the styling for the dish right I just dove in and ate it… I can be like that sometimes.. 😉 Enjoy! 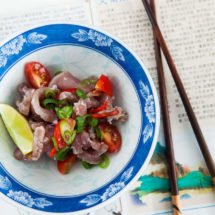