Delicious and easy to make bell pepper soup. Make it extra spicy by adding some chili flakes and chopped chorizo.

The other day Charlotte and I had one of our cooking moments. I already shared the Asian salad with salmon before but as promised we also made this delicious spicy bell pepper soup. It started with the fact that I had about 5 or 6 red bell peppers left over after a photoshoot. So they had to be used or they would have to be thrown out. Charlotte suggested to make a soup out of them and so we did.

Ideally you should first roast the bell peppers and remove the skins. But that was a lot of work we didn’t want to do so we decided to try and see what would happen if we simply cooked them for long enough and then used the stick blender.

One thing I definitely don’t like about bell peppers is the hard skin. It’s fine if you eat them raw but once cooked you want that skin to either be gone or be really soft and easy to chew. I was a bit worried it wouldn’t work in the soup but it actually went perfectly fine. You do have to use a stick blender to make sure all skins are properly processed. You can try and roast the bell peppers if you have the time.

If you do, you can either roast them in the oven until they are blackish. Or you can do the same directly on the stove. Once black place them in a bowl, cover with plastic and let them steam for a while. You should be able to remove the skins fairly easily once steamed for long enough. You then remove the seeds and stalks and continue using them in the bell pepper soup.

As for the toppings you use in this soup; It’s up to you to use whatever you like. If you’re eating paleo you can choose to omit the feta. I like feta so I have no issue using it, but leave out or in depending on your preference.

You can also easily add additional vegetables to the bell pepper soup. If you have carrots, celeriac or celery lying around you can easily add this to the soup. Just be mindful of the amount of liquid that goes in. You might need a bit more if you add more vegetables. 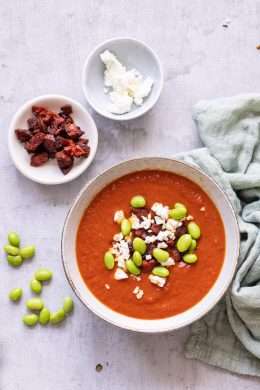