Delicious and surprising are these savory waffles with kimchi. Worth to try even if it sounds a bit weird maybe. Just go for it!

I have a soft spot for waffles. I find them so satisfying and delicious. Usually my go to waffle is a sweet one such as this burned maple butter waffle. The recipe for those is by Donna Hay and as a coincidence, so is this one. I was having a cooking day with Charlotte and we figured we wanted to make waffles that were slightly different. I had a jar of kimchi lying around that needed to be used.

So I started searching on the internet for waffles and kimchi and came up one by Donna Hay. Now waffles and Donna Hay is a good match as far as I am concerned. So these savory waffles with kimchi had to be good too. I was a bit hesitant on the kimchi I have to say but they were so so good!

For making these waffles you actually incorporate the kimchi into the batter. You have to cut it quite finely so it divides well across the batter. By whisking the egg whites to stiff peaks you create some air into them and after baking them in the waffle iron they have a very delicious crunchy texture.

These would also go really well with a fried egg on top I am sure. We kept them quite simple and just made some sauce to go over it. The fried onions also give it an extra crunch so I would highly recommend adding that in. It’s so good.

For all those people that do not like buttermilk, you don’t actually taste it in the finished product. It is purely so that it creates some additional air into the waffles. Just try for yourself and you will see that the buttermilk is just there to enhance the waffles. 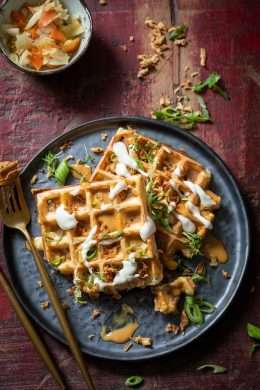