Making the most delicious – and easy – gluten free waffles

So you think gluten free waffles are boring and cannot live up to the expectations? Then you haven’t tried my delicious and simple gluten free waffles. But no problem I’ll walk you through the process of making them here so you can make them yourself at home too!

I’ve got to confess; my first gluten free waffles where less then desirable. They got old in a matter of minutes and by the time I was ready to eat they were – to say the least – just simply not good. There is something to keep in mind when you’re making waffles that do not contain gluten. You have to make sure they stick together for one. The lack of gluten will make them fall apart much quicker. And the last thing you want is for your waffles to disintegrate right in your waffle maker.

What do you have to do to make delicious gluten free waffles? First you need a couple of basic ingredients. An alternative for flour, something that will stick the waffles together and of course some flavours to go into it. For this recipe I used the following ingredients:

In this particular recipe the sticking ingredients are the eggs and the tapioca. Those two combined make sure that the recipe will be successful. Tapioca works the same way as arrow root, so you can substitute one for the other. Making the batter itself is pretty straight forward. You simple mix the dry ingredients and mix the wet ingredients in a separate bowl. Add the two together and the batter is ready to be cooked.

Some variations and substitutes

As the name of the recipe suggests; it is a basic recipe. That said you can easily replace certain ingredients or add flavors to you liking.

The coconut milk you can replace with almond milk or any other kind of milk you like. Tapioca can be replaced by arrowroot. But the fun part is adding flavors to the waffles. Think about adding some cinnamon for instance or make these waffles by including the blue berries or other fruit in the filling. You can add apple, pear or even pumpkin.

Also great is adding some grated carrot or grated sweet potato to make sure you incorporate some veggies in your breakfast.

What to do if you have a nut allergy?

Of course if you have a nut allergy you will not want to use almond flour. Instead try if you can find chufa flour (or tiger nut flour) to substitute. I will write more about what chufa is and how to use it soon. For now know that you will be able to find it online or in health food stores. While the name suggests it is a nut it is actually not related to nuts at all and are safe to eat with a nut allergy. 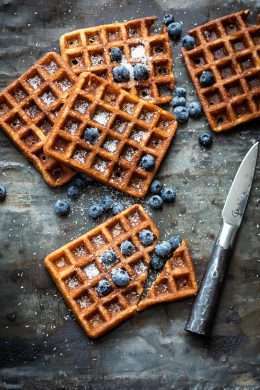 These waffles are delicious and easy to create your own version by changing or adding some of the ingredients.
Prep Time: 10 mins
Cook Time: 10 mins
Total Time: 20 mins
Servings: 8 waffles

Also check out these waffle recipes