Rhubarb soufflé maybe sounds complicated but it is so worth it. And that beautiful pink makes it an elegant dessert too!

Alors, j’taime Paris… My love affair with France dates back from when I was a little kid. My parents always went to France on holidays. When we were big enough to ‘survive’ the long trip from our home to Bretagne, we went there every year. I must have been 13 or 14 when I entered for the very first time. We went to places like St. Malo or Boules (it was called differently but can’t think of the actual name now!) as long as it was close to anything resembling water. My nickname in those days was ‘waterrat’; if there was water around, you would find me in it. So any camping we would go to would have to be by the seaside or a large lake (we went to the Dordogne a couple of times too)

In fact, I received my very first kiss in France. I was 15 years old, very tall and very slim (tall I still am, but not sure where the slimness went..lol) and very blond. We went on holiday that year with friends from my parents who had two kids (they had more kids, but only two came on that particular holiday) and both of them were boys. The youngest of the two was my little sisters age but the oldest of the two, R. was a little older then me and quite handsome too.

I was already feeling those famous butterflies in my stomach every time he walked close to me. At some point we were visiting rather boring caves somewhere close to Paris and R. and I stayed a little bit behind. He suddenly grabbed my arm and pulled me close. “Have you ever been kissed?” He asked me.

I squeaked something that must have sounded like ‘no’. ‘Would you like me to show you how to kiss?’ He proceeded asking, at which I squeaked ‘yes’ and that’s how it happened. I received my very first French kiss in France. How fitting! I can’t say I totally enjoyed the experience but we got to practice that entire holiday so we did get quite good at it.

Of course we never wanted our parents to find out what was going on, so we had a lot of fun hiding our ‘activities’ from our folks. I’m pretty sure that they knew what we were doing behind the tents but at the time we were totally convinced we were being secretive and no one knew we ‘were in love’. It was fun while it lasted and it was really only a holiday fling, but fun non the less.

The theme of this months Monthly Mingle brought back all those memories from years past. Made me think about how I love Paris and France in general. Yes, the french can be obnoxious and arrogant at times, but quite honestly I’ve never had a lot of trouble with that. O I now remember a funny story about my Parisian boyfriend too! I’ll save that for another day!

I made this delicious rhubarb soufflé initially for the Monthly Mingle which was hosted at the time by Jamie from Life’s a Feast. The site is no longer in the air but of course this recipe is still totally worth it.

I initially saw the recipe for this delicious rhubarb soufflé on Masterchef Australia. Since the theme for the Monthly Mingle was rhubarb that only seemed like a fitting entry for the challenge at the time.

Making the rhubarb soufflé is not complicated but a few tips to ensure it rises properly. Brush the sides of the ramekin upwards. That maybe sounds a bit strange but it will ensure the soufflé rises in the right direction.

You can leave out the crumble as that will create an extra risk for the soufflé deflating when you open the oven. I’ve not managed to find a way to prevent the souffle from collapsing a bit once out of the oven. If you have the magic solution for that let me know! 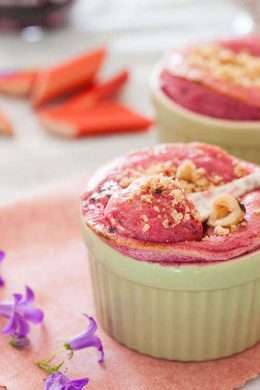 Rhubarb and blackberry souffle with crumble