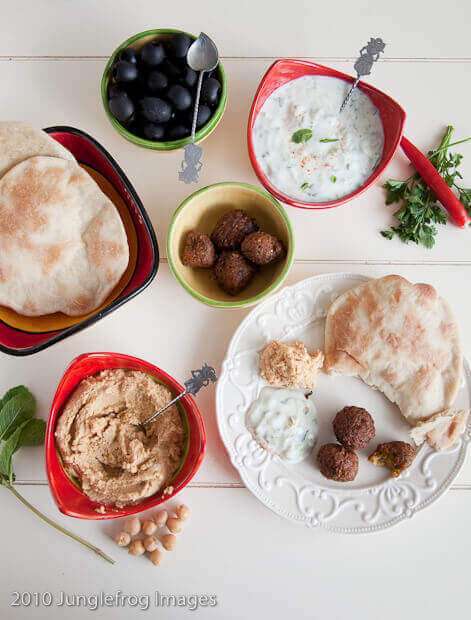 I almost didn’t have time to make this lovely challenge for the february Daring Cooks, but thanks to the lousy weather I had to stay at home today instead of going to Belgium… So I guess that was a lucky coincidence to otherwise nasty weather… 🙂

The 2010 February Daring COOKs challenge was hosted by Michele of Veggie Num Nums. Michele chose to challenge everyone to make mezze based on various recipes from Claudia Roden, Jeffrey Alford and Naomi Dugid.

Michele had already done the groundwork and provided us with the two challenge recipes, which were homemade pitabread and hummus, as well as a few other recipes that I all chose to make, with the exception of the preserved lemons. I love lemons; I truly do but somehow preserving them seems… wrong… Maybe I should just give it a try at some point, I might be surprised but for this challenge I chose to skip those but made the rest. I wanted to make an eggplant dip as well, but guess what, my supermarket was all out of eggplant and I didn’t feel like chasing half the city in search of eggplant so I decided to skip it altogether. In total I made 4 recipes; the pita, the hummus, the cucumber raita and the falafel.

Since the pita would take the biggest amount of time due to the necessary rising etcetera I started there and well, was everyone’s dough so incredibly sticky?? The bread turned out beautifully so nothing wrong there, but it was sooooo sticky I could barely lift my hands out of the dough! Try to knead something that doesn’t want to leave your hands!! I managed somehow but I was sort of covered in sticky dough up to my elbows… Not to mention the flourbag and various other tools…lol.. O well, it got less sticky once it had risen. I then transferred the first four to the oven and while the recipe said 2-3 minutes (really??) that was surely not even enough to make them go from raw to the next stage, so I left them in. I didn’t actually time it but it must have been a good 15 minutes that they had to bake before puffing up and getting a nice light tan. Not sure if I did something wrong, but whatever the time in the oven; the final result was delicious!! 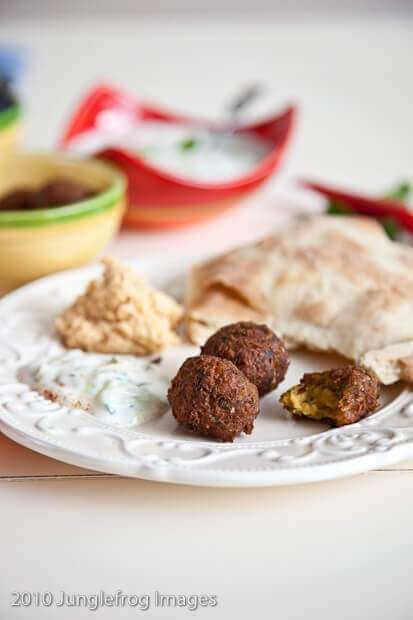 Making the hummus was pretty straightforward although I couldn’t find any tahin. I previously had a jar but since that was finished I hadn’t bought a new jar and it is not something they have in the stores here, so I chose to go with peanut butter instead. And that works fine; it’s a slightly different taste but still quite delicious. I did not add the full qty for the lemonjuice as I thought that was really too much.

Next were the falafels; again very easy to make although I was afraid that they would be too salty. I tasted the mixture after having added the salt and thought it was very very salty, but once fried it was actually quite good and delicious so maybe the frying takes away some of the salty flavor. I don’t know and as long as it tastes good, who cares?

Last but not least was the cucumber raita; instead of dicing the cucumber I grated them very coarsely and left to leak in a colander for a while. I made this all in the afternoon so when Tom got home the first thing he did was stuff one of the pitabreads with falafel and then put the raita and hummus on top. He totally loved it and he is more of a falafel expert then I am. I have only eaten falafel once and it wasn’t the best but I still thought at the time that a good falafel would be worth it. And well it is!