Once upon a time I used to bake along with the Daring Bakers every single month. I would miss it if I could prevent it. But somehow over the years other stuff got priority and at the end of the day I haven’t done any Daring Bakers challenges for like forever. But going through my old posts also brought back memories and part of the fun of joining in with the Daring Bakers is the fact that you will make things you might otherwise never try. And the recipe for this month is one of those examples.

This month’s Daring Bakers’ Challenge took us on a trip to beautiful Brazil! Renata of “Testado, Provado & Aprovado!” taught us how to make Pao De Queijo, tasty cheese buns that make the perfect snack or treat, and that will make your taste buds samba!

Brazil, home of the worldcup football in a short time (just for the record I care nothing whatsoever about football) is ofcourse the perfect choice for this month’s Daring Bakers. I had never heard of these cheesy bites before but they looked good, the recipe sounded simple and didn’t take a whole day (as some of the challenges tend to do!) so I figured let’s go for it. I do have a confession to make. Well two actually; the first one being that I totally messed up the recipe. You see somewhere in the line of ingredients it said 750 ML of cheese and between brackets 250 gram. You can leave it up to me mess that one up and read 750 GRAMS of cheese… From the get go I decided I didn’t want to make the full recipe as I couldn’t think of what to do with 80 cheesy balls, so I halved the recipe. Which meant – according to my brilliant calculation – that it would need to be 375 grams of cheese. Simple… Making the dough was easy even though it took some work to incorporate all that cheese into the mix, but I rolled my little balls and put them in the oven.

After about 15 minutes I peeked in the oven only to find very flat looking things that were suspiciously brown already. I took them out as the recipe said not to get them too brown and left them to cool while I rolled the other half of the balls and proceeded to put them in the oven. I’m not sure what triggered me to have a closer look at the recipe again but at some point I did and o horror, realised why they were so flat. The mixture was way too over cheesy! I put in more than the triple amount of what it should have been! Duh… I hesitated for a bit wether I should leave it like that or make new ones, but I had enough tapioca starch left to make 1/4 recipe this time, which I knew would make enough balls. My good cheese was gone but I had some cheddar left which I carefully measured 60 gr of this time and went on to make the recipe again. Success!! These little darlings did puff up nicely and didn’t flatten and the taste was much better too. And speaking of taste; now comes confession number two. While they were ok-ish I didn’t think they were that special. Maybe they need to be eaten with something rather than on their own and maybe the cheddar didn’t do them any good in terms of flavor. I’ve seen examples of people making these and filling them with all kinds of delicious stuff and I can see how that would be a winner.

But even though I thought the result was not fantastic I still enjoyed the experience and doing another Daring Bakers recipe again! Whoohoo! 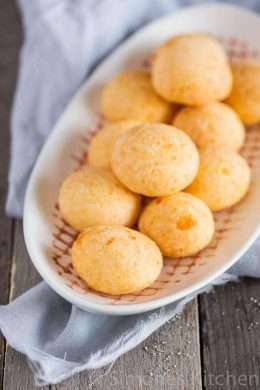 I'm giving you the quantities here of my final batch as that makes 20 small ones so would be sufficient if you want to give this a try!
Prep Time: 30 mins
Cook Time: 25 mins
Total Time: 55 mins
Servings: 20