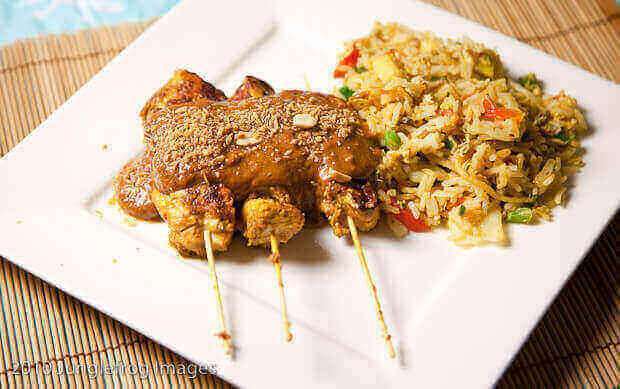 I love satay, always have…. there is just something utterly satisfying about that lovely rich sauce and the marinated meat. I like all kinds of satay really, pork, beef, chicken and I would probably like it in a tofu version as well. So imagine my delight when I found out that the challenge for the Daring Cooks for the first month of the year would be to make satay! One of the mandatory things was to marinate the meat and to make your own sauce.

The January 2010 DC challenge was hosted by Cuppy of Cuppylicious and she chose a delicious Thai-inspired recipe for Pork Satay from the book 1000 Recipes by Martha Day.

So that was not too complicated to do and although not entirely within the limits of my healthy eating resolution… 🙂 it still was quite good! Making the marinade was simple; I put everything into the foodprocessor, gave it a couple of pulses and it was done. I chose chicken as unfortunately most of the beef in our supermarket is either too expensive or simply not that good, so I opted for the save thing to do here. Ofcourse considering that the marinating makes the meat more tender I could have tried it with a cheaper cut of meat but I only thought about that once I was back home and ready to start… Tsss..

The chicken was marinated for about 6 hours I think all in all. We had dinner quite late that night and I started the marinating around the afternoon somewhere. Didn’t really time it as I thought it would be sufficient. Looking at the marinate sauce it was a little chunkier than what I am used to. In most cases for satay we actually use a premade marinade (yes, yes, lazy I know) that is on a ketjap/soy sauce base which is darker and more fluid than this marinade. In terms of taste it was totally different then what we normally have. I didn’t change anything in the marinade recipe, so just went with the ingredients and roughly the qty’s that cuppy gave. And it was good, not thrilling or mindblowingly good, but good.. 🙂 I might change it for next time as I do think this makes a great base to start working on a marinade that has a little more punch. Overall the taste was very – how shall I describe this – flat maybe? That sounds a bit negative and it wasn’t but for lack of a better word… 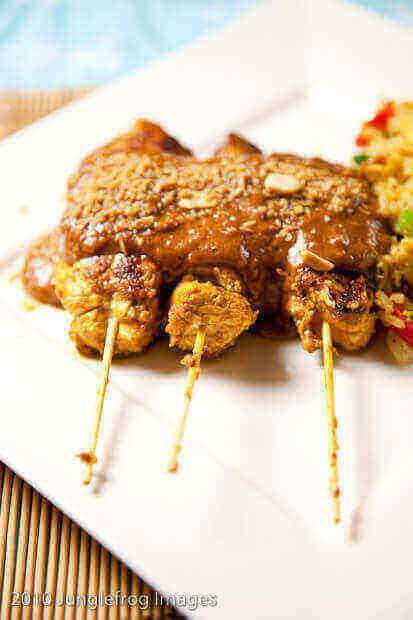 Now on to the peanut sauce; for me a satay is not called a satay when it is not accompanied by peanut sauce, so naturally I opted to go for the peanut sauce instead of one of the other options which also sounded great by the way and I might try those at some point in the future.

This peanutsauce has coconut milk in it, which made the taste also different from the regular and I loved the coconut taste in it. Initially I thought it was a bit too overpowering if you kept to the qty’s in the recipe so I added more (probably double) peanutbutter and some of the other ingredients, but also here I would have liked it to be a little spicier. That was probably largely due to the fact that I thought I had forgotten to get dried chillies only to realize after the fact that I still had some stashed away.. :Y Hmmm, silly me…

Overall this was a great challenge, well, to be honest, not really a challenge as we have made our own peanutsauce before as well as the marinating but it was still interesting to work with a totally different recipe. Now what I did NOT like was the fried rice we decided to have together with the satay. I had chosen – for better speed during cooking – to add a prepackaged spice mix for fried rice from a well know brand here that we have used before, but while I added the rice and then the spice mix I already noticed that it smelt of… well, it smelled of old goat really. What the F…?

There was no meat in the mix as we already had the satay and it was truly in the spicemix as the smell only became noticeable once I added the mix in! I didn’t say anything but while eating it I really did not like the taste either, so I said to Tom (who never eats goat or goatcheese or anything closely goat-related) that I though there was a weird taste to the fried rice. And he immediately said that yes, it smelt and tasted like goat! And that coming from someone who has no experience eating goat-stuff…. Needless to say I will never use that mix again, nor did we finish it. Good thing the satay was filling enough!

So if you want to try the marinade and the peanutsauce I have included the recipes below; for all the other options check out the other Daring Cooks blogs!