Making pasta at home is really not very complicated and quite fun to do. With this recipe for homemade pasta you’re good to go!

I’ve been wanting to have one for a while; a real pasta machine… Once.. a couple of years ago I followed a workshop on making pasta. That was not a success. Far too many people where crammed into one space with just a handful of pasta machines. The result? I was convinced that making your own pasta was difficult and not worth the trouble. Until Charlotte suggested we try her machine (which needed some serious dusting before we could use it) and make our own pasta.

It was on the hottest day of the year and we were sweating in the kitchen but apart from the fact that we had a lot of fun doing it the homemade pasta was also quite tasty and not at all difficult. So I wanted to have a machine too. And as luck would have it I have a Kitchen Aid and there is a handy attachment for the Kitchen Aid to make pasta. It does the turning itself and that makes homemade pasta with one person a lot easier.

And – such coincidence – it was also my birthday, so Tom got me a pretty attachment for my Kitchen Aid. To make my own pasta. So of course Charlotte and I set a date to make some homemade pasta (why change a winning team right?) and we set out to make our pasta. The dough came together in a few minutes. I still had some 00 flour lying around, egg thrown in and start the kneading. I kind of forgot that that is the part that takes a bit of work, but if you need some extra exercise or need to get rid of some frustrations; perfect!

And while the dough was resting we could cook and bake some other delicious things for dinner and after about 1,5 hours we could start turning the dough. As you can see… the first attempt left something to be desired… 😉 I had to kind of get to known the machine and how to handle the dough but once we got the hang of it, it was very simple.

And the turning of the dough was so much easier with the KitchenAid than it was with the handmachine. Biggest advantage? You have two hands available for guiding the dough through the machine. Of course you have that as well if you’re with more than one person but still it’s handy that you can also do this alone. We chose to make spaghetti this time. In the package there are three rollers; one for lasagna sheets and kneading the dough, one for spaghetti and one for tagliatelle. We did make the spaghetti a little bit too long. Spaghetti of about a meter is maybe a bit too much.. Lol… It gets entangled and becomes hard to mix with anything!

The pasta itself was really good. I picked a simple recipe from Jamie (as in Jamie Oliver) because it seemed a good choice for fresh pasta. And I had test the cooking times as well, as fresh pasta literally takes a few minutes to make. But of course the thickness of the home made pasta determines the final cooking time. Three minutes in our case. 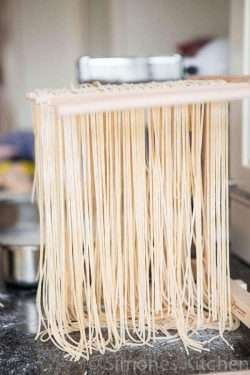 Also check out how to make beetroot pasta.