How to make the best pad thai at home

Make your own pad thai at home

If you’ve been to Thailand than you have probably tried that iconic Thai recipe Pad Thai. Or at least I cannot imagine that you haven’t! The first time we had an original pad thai was in Chiang Mai. Still one of my favorite cities in Thailand (and we’ll soon go there again!) Yay!) and a city where you definitely do not have to suffer from hunger.

We were wandering around a little market and all the delicious smells we from the various stalls made us rather hungry. We spotted a small stall that was very busy. Three women where behind the ‘counter’ continuously scooping something in small boxes. A closer look revealed that it was pad thai (well we did have to ask what it was. Haha..) Since it appeared to be the busiest stall and it looked fantastic, we had to try for our selves. It cost a total of 50 cents. Ridiculously cheap for a rather filling meal. It has been a couple of years since but I’m guessing you can still enjoy a good meal for little money in Chiang Mai!

Want to make it at home? Try the recipe below!

Are you a fan of Asian recipes? Than you might try these delicious coconut pancakes as well! 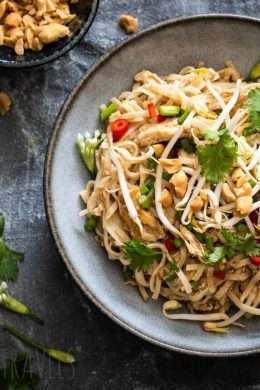