If you like sweet, spicy and crunchy dishes then look no further! This delicious coca cola chicken is the perfect meal. Even if you don’t like cola (I don’t) you might be surprised by how delicious this is.

I have a very good friend who is addicted to cola. Or maybe addicted is too big a word but it’s her drink of choice, always, everywhere. I have teased her about it plenty of times, but she’s persistent. Not just coke, but it has to be one brand and it has to be coke light. No other stuff please. About a year ago we were shopping and as usual I was browsing in the cookbook section of the bookstore when we spotted a little book in the shape of a cola bottle, that – you guessed it – was all about cooking with cola. H. took it home and she made something from the book but hated it completely.

When I received the book Have you eaten by Billy Law, cola was the last thing on my mind, going through all those gorgeous recipes. You might know Billy from the Masterchef Australia series where he did quite well. He was in the season where they cooked for the Dalai Lama (I always forget which year is which but it is those things that stick in my mind!)

At the time Billy stood out for me as he had a great way of cooking delicious Asian dishes plus he was also a foodblogger. That creates a bond doesn’t it? 😉 Billy styled, photographed and created all the recipes for the book and it is a wonderful mix of different recipes. A lot of the recipes have a Malaysian background but you will also find a lot of recipes from other parts of the world.

I was having a hard time deciding which recipe I was going to make first for the review as there are many I want to try. He also has a couple of delicious pork belly recipes there that I am dying to try out, especially since I have two pieces of pork belly in the freezer. However, pork belly takes a lot of time so I wanted to find a fairly quick recipe. And then I saw it ; Coca cola Chicken… I just knew I had to make it!!

And you know what; it was surprisingly good. You have to know that I do not like cola at all. I never drink it nor do I drink any other fizzy drink (except the champagne variety..lol) so I wasn’t sure what to expect of this really quick and simple dish. It’s quite salty so be careful with adding extra salt here. It’s probably also due to my dark soy sauce being rather salty but it was still delicious.

What goes into the coca cola chicken?

How to prepare the coca cola chicken

Preparing the dish is fairly straight forward. You do have to keep in mind that you need about an hour to marinate the chicken. So it’s best to get that task out of the way. You can prepare the chicken in the morning and finish in the evening. Just leave the chicken to marinate in the fridge.

Cooking the chicken might take a bit longer. I’ve made this coca cola chicken quite a few times and I have found differences in the amount of time it took to cook down the coke. Apparently which brand of coke you use makes a difference in the end result. Just be patient; it will eventually happen.

Can I use cola light for this recipe?

If cutting down on the sugar is your goal than sure you can use cola light. However the result might not be the same. Due to the high sugar content in the regular sugar, you get that lovely sticky result. Using cola light might not work this well.

Can I leave out the cashew nuts?

Yes you sure can. You can substitute the cashew nuts for another type of nut, like almonds. or leave them out all together.

What can I use to serve the coca cola chicken?

You can serve the chicken with rice, cauliflower rice, potato puree, sweet potato puree (although it will get very sweet all together) or celeriac puree.

What can I substitute the soy sauce with? 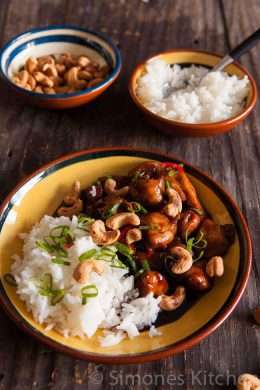 The perfect combination of sweet and salty. This dish will make you come back to it, over and over again. Also please note you need about an hour to marinate the chicken.
Prep Time: 10 mins
Cook Time: 15 mins
Total Time: 25 mins
Servings: 4 people

Disclaimer: I received the book from Hardie Grant for review purposes. All opinions expressed are my own

« Previous PostOliebollen or oil balls…. ;)
Next Post » Making your own patatas bravas