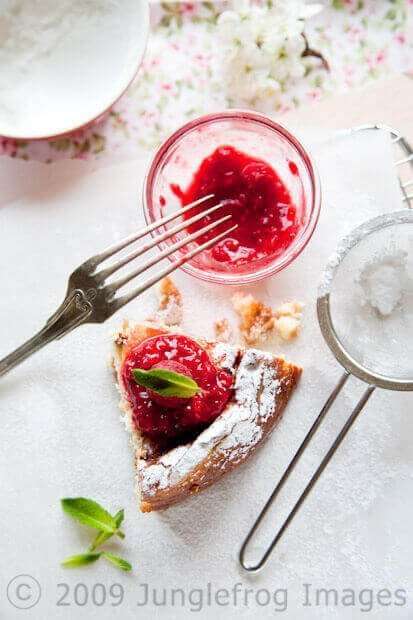 The April 2009 challenge is hosted by Jenny from Jenny Bakes. She has chosen Abbey’s Infamous Cheesecake as the challenge.

A while ago I was first pointed to the Daring Bakers by seeing some of the amazing results of their march and february challenges and I didn’t hesitate one minute and signed up. One of the fun parts of this challenge is that it’s all secret until the final reveal date on the 27th of each month. That also means that I baked this and am writing this post at Easter and not on the actual posting date… 🙂 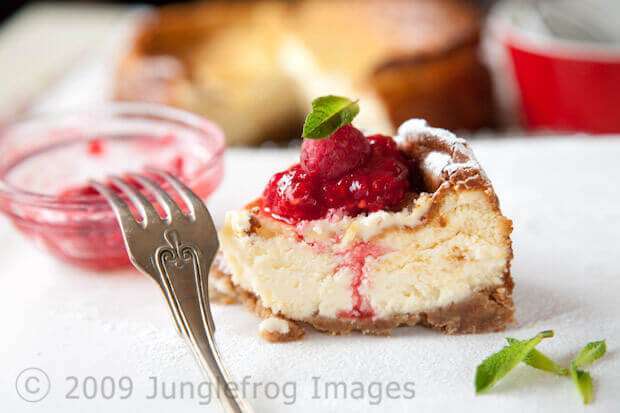 I was a little shocked to find out that my first official challenge would be a cheesecake. I am not too fond of most cheesecakes you can find here in Holland, which are probably not the right ones in the first place, but that was the only reference I had to cheesecakes. Luckily we were given enough freedom in the creation of the recipe to adjust it to my own taste, so I picked a creamcheese that I have always really liked and is not too sour. This might be a very wrong observation but I always thought that cheesecakes were just so very very heavy and sour tasting, so that was not what I wanted in my very first cheesecake.

I also have to tell you that traditionally the cheesecakes that are made in Holland are not made with cheese but with quark and are not baked but only chilled in the fridge. I’ve always really liked those, but for this recipe one of the requirements was that it had to be baked, so I baked it… 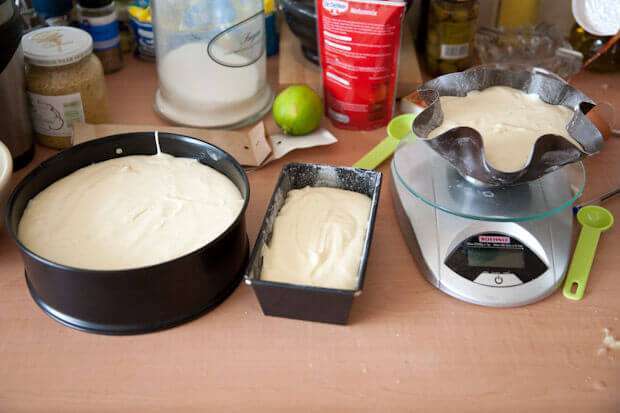 There were a couple of obstacles and one was the fact that you apparently have to bake a cheesecake in a waterbath to prevent the crust from cracking. I had read that you could also place the waterbath at the lower rack but that unfortunately did not do the job so well, which meant I had a cracked crust… Then the second obstacle I had gotten myself into was that I used three different sized containers for making the final cheesecake. One was a springform, one a small cakeform and one form of a more creative shape. All three were different in size which potentially meant different baking times! Not very handy I have to confess, but I would have to find a way around it. So I started with baking the bigger form and after 30 minutes or so I added the other one in there, thinking that would have them all ready in perfect timing. But checking the oven after 30 minutes I saw that the bigger form had the cheesecake rising to incredible heights and already browning a little, so popping in the other two… I wasn’t sure what would happen.

And sure enough when it was time to remove the first one from the oven, the other two did not look like they were done at all. They did feel firm enough so I chanced it and just turned of the oven to let everything cool for the hour that the recipe told me to cool it in the oven. Ofcourse the incredible height of the cheesecake had plummeted to greater depths by the time the cake got to a mild temperature. Maybe that is normal, but it was a bit disappointing to me.

I didn’t know what was supposed to happen, but the cheesecakes I had seen sofar all seemed quite perfect and flawless so to have mine just crack down the middle… 🙁 was disappointing!

Ofcourse the waiting part was the hardest 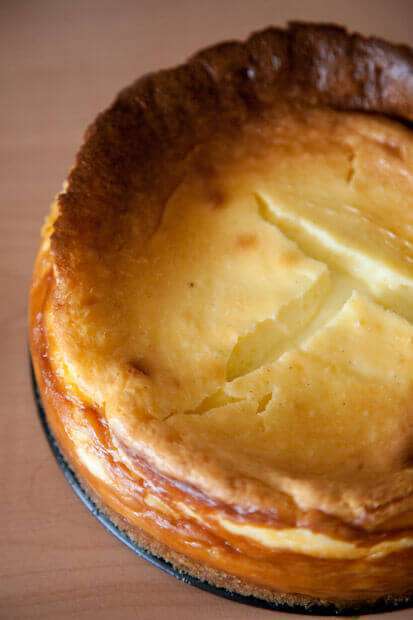 as I had no way of knowing if my cheesecake was tasty despite all the things that had happened. First it had to cool in the oven for an hour and then it had to cool outside of the oven for a long time and then it had to chill in the fridge for hours before we would be able to taste it. Ofcourse; after we had dinner and it was time for coffee… we couldn’t resist any longer and tried the first part of our cheesecake. I still had some blackberries in the fridge that I pureed with a little sugar and put that on top of the cheesecake and o my god, it was absolutely delicious!!!

I had not really done anything adventurous to the cheesecake other then add a bit more lemon and some cointreau in the mix, but I wanted to stay close to the original as I didn’t know how it would taste. But now that I know that we actually really like the cheesecake I can see endless possibilities here and this will definitely be something I am going to make more often!! Here is the original recipe as taken from Jenny:

please note that to make this cheesecake you need quite a bit of time. One hour in the oven, one hour cooling time in the oven and then preferably chilling it overnight so make sure you keep that into account! 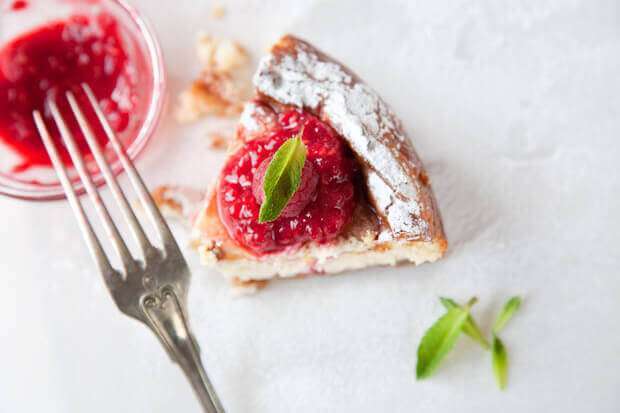 Some variations from the recipe creator:

** Lavender-scented cheesecake w/ blueberries – heat the cup of heavy cream in the microwave or a saucepan until hot but not boiling. Add 2 tbsp of lavender flowers and stir. Let lavender steep in the cream for about 10-15 minutes, then strain the flowers out. Add strained cream to cheesecake batter as normal. Top with fresh blueberries, or make a quick stovetop blueberry sauce (splash of orange juice, blueberries, a little bit of sugar, and a dash of cinnamon – cook until berries burst, then cool)

** Cafe au lait cheesecake with caramel – take 1/4 cup of the heavy cream and heat it in the microwave for a short amount of time until very hot. Add 1-2 tbsp. instant espresso or instant coffee; stir to dissolve. Add this to the remainder of cream and use as normal. Top cheesecake with homemade caramel sauce (I usually find one on the food network website – just make sure it has heavy cream in it. You can use store-bought in a pinch, but the flavor is just not the same since its usually just sugar and corn syrup with no dairy).

** Tropical – add about a half cup of chopped macadamias to the crust, then top the cake with a mango-raspberry-mandarin orange puree.

** Mexican Turtle – add a bar of melted dark chocolate (between 3 and 5 oz., to taste) to the batter, along with a teaspoon of cinnamon and a dash of cayenne pepper (about 1/8 tsp.). Top it with pecan halves and a homemade caramel sauce.

** Honey-cinnamon with port-pomegranate poached pears – replace 1/2 cup of the sugar with 1/2 cup of honey, add about a teaspoon or more (to taste) of cinnamon. Take 2 pears (any variety you like or whatever is in season), peeled and cored, and poach them in a boiling poaching liquid of port wine, pomegranate juice/seeds, a couple of “coins” of fresh ginger, a cinnamon stick, and about a 1/4 cup of sugar. Poach them until tender, then let cool. Strain the poaching liquid and simmer until reduced to a syrupy-glaze consistency, then cool. Thinly slice the cooled pears and fan them out atop the cooled cheesecake. Pour the cooled poaching syrup over the pears, then sprinkle the top with chopped walnuts and fresh pomegranate seeds.

Some variations from Jenny (from JennyBakes):

**Cheesecakelets – put in muffin tins, ramekins, or custard cups. Try baking 20-35 minutes, or until still a little jiggly, and cool as before.