Recipes » Cake and cookies » Blueberry cheesecake and on the radio

Blueberry cheesecake and on the radio

And as promised here is the recipe for the cheesecake of last monday. I had fun on the radio.. 😉 A little bit nervous too, I will not lie to you, but the nerves were over quite quickly. Upon arrival at the studio’s it turned out that the normal presentor of the show,  Winfried Baijens was not gonna be there but the show would be hosted by Sylvana Simons. And secretly I thought that was fun as I know Sylvana (well not personally but I know her from her days working at MTV, ages ago) and I don’t know Winfried. But it also made for a slightly more chaotic show than normal I would think…

But that was all good and it was just fun to experience. Because Tom was there as well I actually have a few pics of the radioshow… The dish of the day was the pasta salad I shared with you earlier and for dessert I made this blue berry cheesecake. I mean; what’s not to love right?

The upper one is the long version as the show is two hours, the bottom one which says video (without much video) is the short 7 minute version! 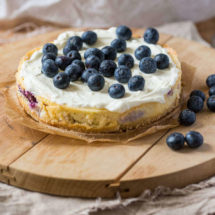 For this cheesecake I used a springform of 18 cm. That made the cheesecake relatively high (on the photos we divided them across two different tins, so this one is much lower) and the baking time had to be increased by about 10 minutes. If you use a 20 cm tin 30 minutes should be enough.