The best no bake paleo and vegan cheesecake

No bake paleo and vegan cheesecake

Growing up with a mum who hated cooking (yes really) I was usually the one who made cakes and the like for birthdays. My apple pie was legendary! (well not really but it sounds kind of good right?) At the time cooking was not really high on my list of great things to do, so my repertoire of festive bakes was small. In fact it consisted of three things:

The cheese cake I was used to making came out of a package though. It was 1 package for the crust (cookies and mix with butter) and it was one package for the filling. In the package you would find a pink powdery substance that was INSANELY sweet. Add quark into it (if you don’t know what quark is, it is a very young kind of cream cheese), stir and pour onto the crust. In the fridge and done.

At the time, we’re talking roughly 40 years ago, the baked cheese cake was something that just didn’t exist in the Netherlands. We had ‘kwarktaart’ (that would be the no bake cheese cake) and that was it. It was pretty populair too. You would get various different colors at most birthdays.

It was years later that I tasted my first baked cheese cake and boy, did I hate it! I thought it was disgusting. Don’t hold it against me: the specific one I tasted was just a badly made one. But I didn’t know that. I thought they would all taste the same.

Thanks to a Daring Bakers challenge I made my own cheese cake and was completely sold. (And you just have to try my pumpkin cheesecake!)

Of course; a ‘regular’ cheese cake, while utterly delicious, is not really very healthy. It contains loads of sugar and that is just one of the problems. But up till now I hadn’t really tried a paleo version of the cheesecake. But boy this is good! Possibly even better than the original I’d say. In terms of calories: don’t make the mistake of thinking that this will be less calories because it is ‘healthier’ Well it’s not. At the end of the day it is a treat and should be looked at it that way. And it is so filling; a little piece will go a long way!

I was curious if the cheesecake would stay together once defrosted and it did. It does become fairly soft, so best to slice it when it is still a bit frozen.

Also pretty delicious is the fastest cheesecake ever! 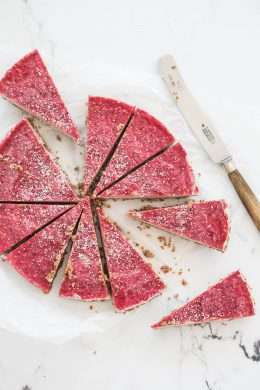 No bake vegan and paleo cheesecake